Pirelli Scorpion MX enjoys glory as Tony Cairoli and Marvin Musquin bring home the 2010 MX Titles; with these victories, Pirelli reaches the 54th Championship win and KTM records its first in the premiere class since 1985. 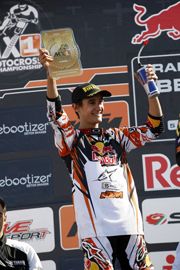 Following the MX1 World Championship win by Tony Cairoli in hismemorable first season aboard the new KTM 350 SX-F with the Pirelli Scorpion MX tyres, Pirelli celebrates another 2010 trophy with Marvin Musquin’s victory this past weekend, the reining World Champion who again dominated the MX2 class and repeated his 2009 result. With these two victories, Pirelli adds its 53rd and 54th World titles in the MX1 and MX2 classes. The FIM World Motocross Championship strongly evidences Pirelli’s racing passion and successes in the most competitive global racing series, demonstrated on two wheels also in the FIM Cross - Country Rallies World, the Enduropale du Touquet and MX Season’s opening Series. MX1 WORLD CHAMPION 2010 - A SUCCESS STORY Cairoli, the winner of 8 GPs so far this year on the factory KTM, wrapped up the title with two GP’s left in the season after winning more than half of the motos in the MX1 class, giving the Red Bull KTM Factory Racing Team the trophy in Brazil. The four-time World Champion was just shy of the podium only once during the entire season, having finished in fourth place at the GP of Germany. On a new bike and new tyres, the 24-year-old Sicilian’s victorious debut with Red Bull KTM Racing brings to his career total to 37 Grand Prix wins, more than that of top ten GP riders Roger De Coster (BE) and Mickaël Pichon (FR). Pirelli and Cairoli set also an important milestone in the history of KTM  Motorsport, for this year represents the Austrian manufacturer’s return to success in the MX1 class after 25 years.. The new KTM 350 SX-F packaged with Pirelli Scorpion MX tyres was developed in close cooperation with 10-time Word Champion and Pirelli rider Stefan Everts, now the MX Director for Red Bull KTM Factory Racing. The bike’s smaller engine size at the start of each race was overcome by off-the-line traction of the Scorpion MX tyres combined with the bike’s electronics, thus delivering many unexpected holeshots. Additional cornering stability from the tyres and the bike’s increased agility from a reduced weight and electronic quick-starts helped maintain every advantage Cairoli could gain throughout the race, playing a critical role in the Cairoli-KTM success story. In an interview with Motocross magazine of Italy, Cairoli commented, “I didn’t change anything [on my starts]. My method of starts is always the same, it’s true, and this year I’ve started better. I changed tyre supplier…” From KTM, Cairoli summed it up best: “Scorpion MX is an awesome tyre, it feels really comfortable to ride and also really safe, you feel a lot of traction in a lot of different types of ground.” Repeat title for the FrenchmanMX2

Cairoli’s KTM Factory teammate and reining MX2 World Champion Marvin Musquin captured the title again this year in the MX2 class together with Pirelli, having already raced to 8 GP victories in 14 rounds in the 125/250cc class, winning with an average of seven seconds advantage and finishing out of podium position at only three rounds during the season. The MX2 victory marks the sixth world title achieved with the Pirelli/KTM partnership. Marvin Musquin commented, “This is the second year that I ride with Pirelli tyres and Team Red Bull KTM, and I was very surprised with their behavior. My favorite is Scorpion MX MidSoft (32) rear and the also the front which I ride very often and on all different terrains! The traction is excellent and my starts are great! Thank you to Pirelli for their support throughout the 2009 and 2010!” With the title victory in the most important MX championship, Pirelli demonstrates its incredible dominance for delivering racing performance and with KTM has illustrated a truly user-friendly setup by taking a completely new bike to victory its first year. “KTM needs the best rubber (tyres) to get the best performance out of the KTM bikes, that's why we choose the best tyres out there and that's the Pirelli Scorpion MX model. Since my active racing career I have been convinced that Pirelli has been making and finding the maximum grip out there”, declared Stefan Everts, MX Director for Red Bull KTM Factory Racing. Pirelli congratulates Tony Cairoli, Marvin Musquin and the entire Red Bull KTM Factory Team and looks forward to more success at the last Championship round in Italy and at the Motocross of Nations in the USA! The championship in 2011 should certainly see the presence of more 350cc machines on the grid in MX1, but surely Cairoli, KTM and Pirelli will defend their Titles as they face even stronger opposition on the global stage of the FIM World Motocross Championship. More detailed information on the Scorpion MX tyres as well as the entire range of Pirelli motorcycle tyres can be found online at www.pirellimoto.com.