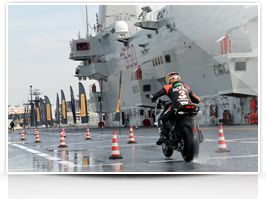 The Roman rider, six-time World Champion, christened the new sport touring tyre from the brand with the long P in an unprecedented braking test Multiple world champion Max Biaggi, top notch tester for Pirelli in an unprecedented braking test on a wet surface: slamming on the brakes on a bike rocketing across the flight deck of an aircraft carrier being soaked by water pumps at 17 atm. This is what happened on the Italian Navy's aircraft carrier Cavour, anchored in the new Taranto naval base which served as an unprecedented test track for the presentation of the new Pirelli Angel GT sport touring tyre, developed for naked, super sport and touring bikes. The six-time World Champion and reigning World Superbike Champion accelerated to 100 kph to then grab the brakes hard at the pre-established braking spot. The new Angel GT tyres allowed Biaggi to first unload all his bike's horses to the ground and ensured an immediate stop on wet asphalt. 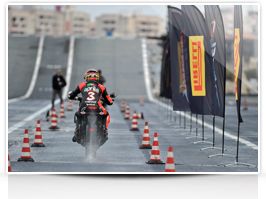 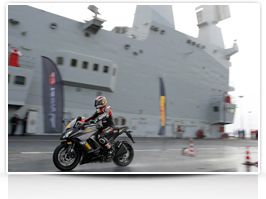 This unprecedented test was arranged by Pirelli thanks to the invaluable and professional cooperation of Difesa Servizi SpA and in particular the Italian Navy, which made the flight deck of the Cavour available, moored in the Taranto military port. 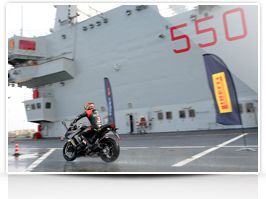 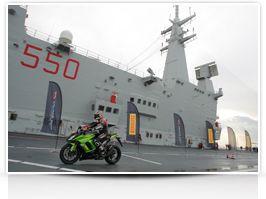