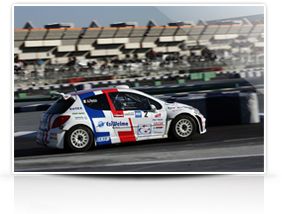 Alessandro Perico recently dominated the Bomboogie Trofeo S2000 Rally at the Bologna Motorshow with the assistance of soft compound Pirelli Scorpion K6 tyres. Perico, from Bergamo in Italy, took the win at the wheel of a Peugeot 207 Super 2000 run by PA Racing, beating fellow countryman Renato Travaglia in a Ford Fiesta S2000. In the arena set up inside the motorshow, Perico entertained crowds after winning all the scheduled heats. After a successful year competing in the Italian Rally Championship where Perico finished fifth overall, the Italian driver’s win at the annual competiton in Bologna marks the end of a successful year competing on home turf. "To win in Bologna in front of such a large audience is both exciting and rewarding,” said 36-year-old Perico. “I always try to drive in a spectacular way to entertain the crowds and I hope that the final race against Renato Travaglia was enjoyable for the fans. Bologna marks the end of my season but I hope to return next year to rallying and have another successful year,” added Perico. Pirelli’s product manager Terenzio Testoni commented: “Alessandro’s win in Bolgona is testament to his skills and maturity behind the wheel.  He has done an excellent job in the Italian Rally Championship this year, and his win in Bologna is the perfect end to a successful rallying season. I am extremely pleased to hear that our Pirelli Scorpion K6 gravel tyres which are idea for cold and wet conditions coped well with the demands of a tough asphalt circuit, excelling both in durability and grip over the course of the tricky circuit. This was different to last year, when the track was all-gravel. The K6 tyres provided excellent stability and driving precision through the long corners, without compromising on traction, which is what allowed the car to have a rapid exit from every bend: a key to success at the Bologna Rallysprint track.” For more information about Pirelli, please contact Anthony Peacock on +44 (0)7765 896 930 or anthony@mediatica.co.uk