Milan, February 16th, 2011 - Following an extensive campaign of private testing - which took in more than 18,000 kilometres in Europe and the Middle East - plus three group tests to date, Pirelli has nominated the hard and soft dry tyre compounds for the first four rounds of the 2011 Formula One World Championship: Bahrain, Australia, Malaysia and China. 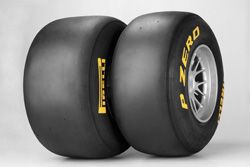 The hard tyre will be the prime tyre, whereas the soft will be the option. This decision has been made in accordance with the track characteristics in the Middle and Far East, which offer high grip and a wide variety of speeds and corners, as well as ambient and track temperatures that are likely to be high. The hard tyre offers an excellent balance between performance and durability in the tough conditions of the first four flyaway races. However, the soft tyre will give extra speed at the expense of resistance, which will make for some fascinating strategies as the teams compete with their new cars for the first time. Pirelli's aim is to have two pit stops at every race, helping to increase the spectacle. Pirelli's motorsport director Paul Hembery commented: "The valuable data that we've collected from both official and private testing has shown us that our nomination of hard and soft tyres is the best way forward for both the drivers and the spectators, so we look forward now to a successful Grand Prix debut and a great show in the Middle and Far East over the next four races. We've enjoyed great collaboration with the teams so far, and with the nominated compounds for the next four races now known, I am sure that this will help to focus their development for the start of the season." Copyright-free images as well as videos and interviews are available for media use at: www.pirelli.com/pressarea For further information please contact: Alexandra Schieren +33 607 03 69 03 - alexandra.schieren@pirelli.com Anthony Peacock +44 7765 896 930 - anthony@mediatica.co.uk

Milan, February 9th 2011 - Just one week after the opening official test session of the year in Valencia, Pirelli is back on track once more for the second group test, which covers four days on the Spanish circuit of Jerez from February 10-13. The Jerez circuit, which last hosted a Formula One Grand Prix in 1997, presents quite a contrast to Valencia, enabling the teams to explore different characteristics of the new PZero rubber, which will be exclusively supplied to the Formula One World Championship in a three-year agreement lasting to 2013. Pirelli will bring all four compounds of slick tyre - supersoft, soft, medium and hard - to the Spanish circuit, as well as the intermediate and wet tyre. Dry conditions in Valencia last week meant that the rain tyres were hardly used, but Pirelli is well-prepared if the weather in Jerez turns wet. The supersoft compound slick tyre offers optimum performance but over a limited period of time. The soft version provides similar performance but is slighter longer lasting. The medium compound provides a balance between endurance and performance, while the hard version is for longer distance running. For the Jerez tests this week, the medium compound has been further developed, in response to data acquired during testing and comments from the teams and drivers. Every car will receive a maximum allocation of 30 sets of tyres in Jerez, part of the overall allocation of 100 sets of tyres for the four pre-season tests. Pirelli's motorsport director Paul Hembery commented: "The feedback from all the drivers and teams after Valencia was very positive, but it is still early days and there's a lot of work to go through; particularly with all the new cars. The four days at Jerez will allow the teams to get used to our tyres on a circuit with different characteristics, in order to explore other aspects of their performance. The changes we have made to the medium compounds are not big, but they constitute another small step in the evolution of our PZero rubber, which as we have already seen, should help improve the spectacle during the coming season. Obviously the Formula One news this week has been dominated by Robert Kubica's accident in Italy, and I know that I speak for everyone at Pirelli in wishing him an extremely speedy recovery." Pirelli was previously at Jerez last September, part of the 18,000-kilometre private testing campaign with Pedro de la Rosa and the Toyota TF109, as the Italian firm geared up to its return to Formula One. The Jerez circuit, which contains some slow corners as well as medium to fast bends, puts particular emphasis on the rear tyres, which have to work hard to provide traction over a wide range of speeds. Though Jerez does not result in especially high top speeds, every aspect of car's performance is comprehensively tested there. The cars will run between 0900 and 1700 on Thursday, Friday, Saturday and Sunday. Temperatures are expected to range between five and 20 degrees centigrade, according to current forecasts. Copyright-free video, as well as photographs and interviews, are available for media use from: