Pirelli Aragón round: Race 1 and Best Lap go to Chaz Davies on his Ducati, new track record in Superpole for Tom Sykes astride his Kawasaki

With 30° asphalt temperature, the riders chose various solutions with most going with the standard SC0 on the rear and the S1699 SC1 development solution on the front 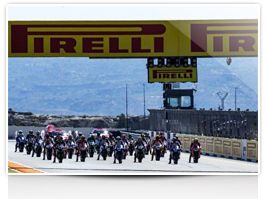 The first race day of the MOTUL FIM World Superbike Championship weekend at the Spanish MotorLand Aragón circuit was bathed in Ducati red. In fact, the Ducati 1199 Panigale R ridden by Welshman Chaz Davies (Aruba.it Racing – Ducati) brought home the first win of the year for the Borgo Panigale based manufacturer in Race 1 after an opening phase of the season that was dominated by the green of reigning World Champion Jonathan Rea's Kawasaki. The British Ducati rider, who started from the fourth spot on the grid, rode an impeccable race, demonstrating a clearly superior pace compared to all the other riders on the track and riding his Ducati once again to victory on the Spanish track after winning Race 2 last year. Tom Sykes (Kawasaki Racing Team), after earning pole position and setting the new track record at 1'49.374 this morning in Superpole 2, improving on the previous record by three tenths of a second, set last year by Leon Haslam, was unable to capitalise on the advantage of starting the race from the front. In fact, Chaz Davies overtook him on the fourth lap, staying at the front of the pack from that point on until the end of the race. During the same lap, the race lost one of its potential protagonists, Michael Van der Mark (Honda World Superbike Team) due to a crash on turn 5. 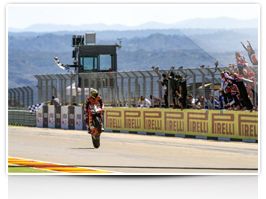 During the ninth lap, the order began to be clear and behind Davies Sykes, Rea, Giugliano, Guintoli and Hayden gave chase. In the tenth lap, Leon Camier was forced to withdraw due to a technical problem and in the meantime, Rea overtook his teammate to move into second place. In the fourteenth lap, Xavi Forès (Barni Racing Team) overtook Davide Giugliano to move into fourth place. In the end, Chaz Davies was first under the chequered flag with an advantage of more than four seconds over Jonathan Rea, second, and Tom Sykes, third and more than twelve seconds ahead of all the other riders, demonstrating the clear supremacy of his Panigale. 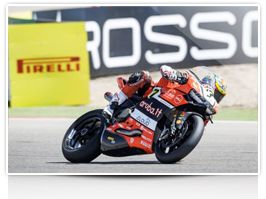 Race 1 standings: 1) Chaz Davies (Aruba.it Racing – Ducati) 2) Jonathan Rea (Kawasaki Racing Team) 3) Tom Sykes (Kawasaki Racing Team) 4) Xavi Forés (Barni Racing Team) 5) Davide Giugliano (Aruba.it Racing – Ducati) 6) Nicky Hayden (Honda World Superbike Team) 7) Jordi Torres (Althea BMW Racing Team) 8 ) Alex Lowes (Pata Yamaha Official WSBK Team) 9) Sylvain Guintoli (Pata Yamaha Official WSBK Team) 10) Lorenzo Savadori (IodaRacing Team) The Pirelli solutions chosen by the riders for Race 1: In Race 1 a bit of all the DIABLO™ Superbike solutions that Pirelli brought for this round were used, which demonstrates the excellent performance the entire range provides. Specifically, on the front the most popular choice was the S1699 SC1 development solution, already well known and highly regarded by the riders, chosen by 13 out of the 25 on the starting grid, 8 of whom were in the first four rows. The remainder of the riders were equally divided between the standard SC1 and SC2 solutions. As for the rear, as usual the standard SC0 soft solution was the most popular, selected by 15 of the riders. The other riders used the standard SC1 or, alternatively, the new U0989 SC1 development solution. 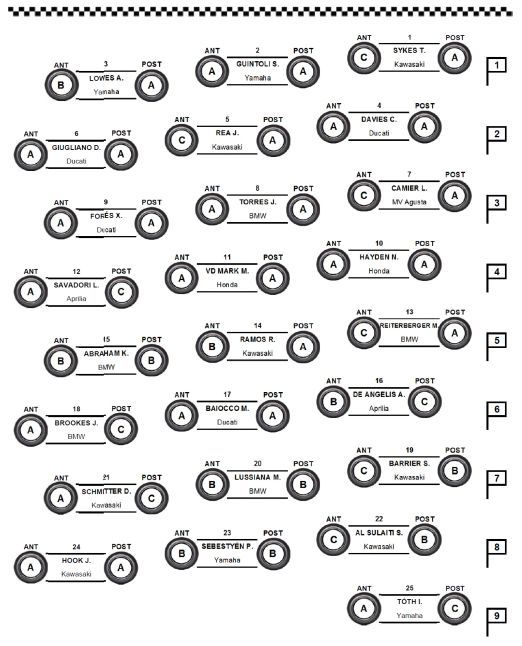 Pirelli Aragón round: Race 1 and Best Lap go to Chaz Davies on his Ducati, new track record in Superpole for Tom Sykes astride his Kawasaki
Newsroom