Pirelli back on track for Stock Car Brasil until 2016 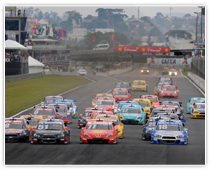 Pirelli returns to the role of sole tyre supplier to Stock Car Brasil, the country’s main racing competition, for the 2013 to 2016 championships. This year, the Milanese company will supply P Zero™ dry-weather and Cinturato™ wet-weather racing tyres manufactured at the Izmit facility in Turkey. The Stock Car tyres have been developed by Pirelli’s Research & Development facility in Brazil in association with the R&D centre in Milan, whilst the compounds will be produced in Italy at the Settimo Torinese manufacturing facility that is also responsible for the development of the Formula 1™ compounds. In order to achieve maximum performance as far as stability, wear and safety are concerned, tests have been carried out in Brazil with the joint assistance of Italian and Brazilian engineers and the championship’s organising body. Pirelli’s return to this competition revives an historic partnership that began in Brazil at the Tarumã circuit in the state of Rio Grande do Sul on 22nd April 1979 during the first ever Stock Car race. 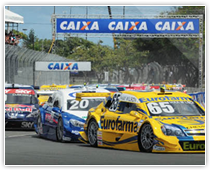 The tyres supplied during the first 25 years of the partnership were manufactured in Brazil and kept abreast with the development of the racing vehicles from the first Opala to the current tube-chassis models. From 2004 to 2006, the tyres were supplied by Pirelli manufacturing facilities in Italy, whilst in 2007, the last year of its involvement in the category, the tyres were once again manufactured in Brazil.

Pirelli back on track for Stock Car Brasil until 2016
Newsroom