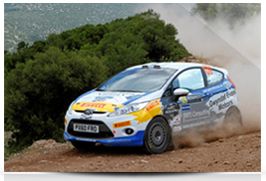 The Pirelli-backed WRC Academy will move to the home of rallying next week as the competitive feeder series returns after a nine-week break for Neste Oil Rally Finland (2-4 August). Renowned for blisteringly quick roads that are lined by numerous trees and characterised by countless jumps and corners, Rally Finland is an event that favours the brave. More commonly known as the Finnish Grand Prix, Rally Finland is based in the student city of Jyvaskyla where tens of thousands of fans gather to watch the most iconic event on the world rally calendar. Pirelli will be on hand to supply the WRC Academy crews with the highly successful K4 tyre. The Italian tyre manufacturer has developed a version of the K4 tyre specifically to suit the Ford Fiesta R2 in 175/70-15 K4 size. Based on the vastly successful Scorpion cover that was used on the World Rally Championship from 2008-2010, the K4 WRC Academy tyre is lighter than the Scorpion with a focus on performance as well as outright durability. After winning the opening round of the season and after finishing runner-up at the previous championship round in Greece, Britain’s Alastair Fisher is currently leading the WRC Academy by eight points. To help Fisher prepare for his assault on the world stage, the Northern Irish driver has also been competing in this year’s Pirelli-supported British Rally Championship at the wheel of a Fiesta R2. Former Pirelli Star Driver Elfyn Evans is second in the championship, proving that Pirelli’s programme helps young drivers sucessfully prepare for the next step in their rally career. The 23-year-old Welshman took a win on the Acropolis Rally back in May and will be gunning for another victory next week in an attempt to overhaul Fisher from the top spot. Former Pirelli Star Driver Global Shootout winner, Brendan Reeves, is third in the championship, only three points behind second-placed Evans. One of six selected to compete in last year’s WRC Academy backed by Pirelli, the Australian finished fifth in 2011, and will be aiming for a podium finish next week in order to close in on the two Britons that lie out front. In fourth place is Spanish driver Jose Suarez with 21 points and rounding off the top five is Dutch driver Timo van der Marel with 18 points. Sweden’s Pontus Tidemand finished third in the WRC Academy’s opening round but a retirement on the Acropolis Rally had dropped the driver back to sixth. Scotland’s John MacCrone is currently seventh, four points ahead of Sweden’s Fredrik Ahlin. America’s Christopher Duplessis is ninth with eight points, and lying in tenth place is Portugal’s Joao Silva with four points. Pirelli’s motorsport director, Paul Hembery said: “Rally Finland is the one event that every driver wants to win, just because there is so much speed and commitment needed to succeed. It’s sure to be one of the toughest tests of the year for our young drivers in the WRC Academy, but in order to learn as much as possible about the event and our tyres here they above all need to be there at the finish. From a tyre point of view, Finland is very demanding due to the high speeds, frequent high temperatures and all the big jumps that characterise the rally. The tyre structure has to absorb the significant impacts generated by constant heavy landings, but despite this non-stop punishment our tyres have an impressive track record of both performance and strength on the rapid forest roads of Finland. As it’s one of the few weekends that doesn’t clash with Formula One, I’m looking forward to attending the event myself and catching up with our many friends.” For more information about Pirelli, please contact Anthony Peacock on +44 7765 896 930  or anthony@mediatica.co.uk