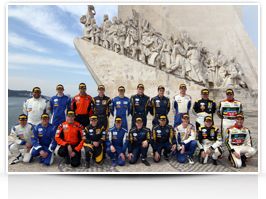 A new challenge awaits the WRC Academy for this week’s season finale as crews prepare for the only mixed surface event of the six-round series that uses Pirelli as the championship’s sole tyre supplier. Based on the Costa Daurada in Spain’s Tarragona region, this year’s Rally de Espana will challenge the crews with a unique blend of both gravel and asphalt speed tests. The biggest challenge will be on Friday with the 44.02km Terra Alta special stage: a test that includes no less than three surface changes.  The cars will then be re-prepared to full gravel specification for the final day of competition. Twelve special stages will form the closing round to this year’s championship and Pirelli will be on hand to supply the crews with its highly competitive RX5 and RE7 asphalt tyres as well as the K4 tyres on gravel – which the crews have used all year. The Rally de Espana presents a unique opportunity for Pirelli to showcase the full range of tyres that have been seen in action throughout the season. The RX family of tyres is among the most versatile in Pirelli’s competition range thanks to a lightly grooved tread pattern, a square profile and a particularly rigid structure. These characteristics help steering precision and provide a rapid response, while maintaining the strength and durability to cope with prolonged high speeds and longer stages. The RX5 will be used in dry conditions with the RE7 available in the event of cold and damp conditions. Pirelli has developed a version of the K4 gravel tyre specifically to suit the Ford Fiesta R2 that is used exclusively on the championship, in 175/70-15 K4 size. Based on the vastly successful Scorpion cover that was used on the World Rally Championship from 2008-2010, the K4 WRC Academy tyre is lighter than the Scorpion with a focus on performance as well as outright durability. Following an outstanding season in the WRC Academy including a hat-trick of victories, former Pirelli UK Star Driver Elfyn Evans was declared the championship winner at last month’s Rally de France. The 23-year-old Welshman’s 50-point lead has meant it is mathematically impossible for any of the other crews to overhaul Evans with just one round remaining. Underlining the success of the prestigious Pirelli Star Driver programme, former Pirelli-backed driver Brendan Reeves lies second. The 23-year-old Australian has proved himself as one of the championship’s most consistent drivers having finished in the top five on every round this season. Following a season-best second place at the recent Rallye de France, Spaniard Jose Suarez is only two points adrift of second-placed Reeves. Eager to clinch the covetered runner-up spot, Suarez will be targeting a podium result ahead of Reeves. Tied in fourth place is Scottish driver John MacCrone and Swede Pontus Tidemand, withboth crews 15 points behind local driver Suarez. Pirelli’s Motorsport Director Paul Hembery commented: “The WRC Academy championship winner may have already been decided but the fight for the runner-up spot is shaping up to be an exciting battle. Both the unexpected weather and the mixed road surfaces in Spain could provide a sting in the tail for the competitors at next weekend’s season finale. Rally de Espana usually takes place earlier in the season where dry weather is more common but as this year’s event is taking place in November, we could expect to see some rain and cooler temperatures.  The mix of surfaces will also place an extra demand of the drivers as well as the tyres, because crews will have little time to adapt to the road surfaces and set-ups required. Making the right choices will be essential in order to make the most of the proven performance and durability of both the asphalt and gravel tyres we will bring to Spain. Finally, I would like to take this opportunity to congratulate Elfyn Evans on winning this year’s championship with one round remaining. He is an exceptionally competent and consistent driver who has a bright future ahead of him. As a former Pirelli Star Driver in the UK, he is the perfect example of a young rally talent who has been able to break onto the world scene with the backing of Pirelli, like so many before him.”