Pirelli best result since its return to the WRC 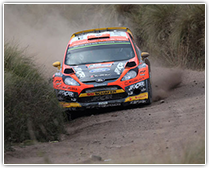 In Argentina, Pirelli enjoyed the best outcome since its return to the World Rally Championship. Thanks to the fourth place of Martin Prokop – equalling his best career result – the WRC2 class victory for Qatari driver Abdulaziz Al Kawari - his best seasonal result so far – and Simone Tempestini's Production Cup victory, Pirelli yielded results in all classes where the company is supporting privateer drivers. One of the best drivers was Ukrainian Yuriy Protasov, who, while leading the race in his PS3, ripped a wheel off but still managed to set the fastest time. In Argentina all Pirelli drivers chose the Reinforced Scorpion KS in the soft compound as main tyre, while the hard compound Reinforced Scorpion KH was used for longer races and with higher temperatures. Both the tyres are based on the K tyre used last year but have been redesigned to ensure improved stability and durability on the rally’s 12 gravel stages and 365 kilometres. The KH was mostly used during the second rounds during some of the races, when temperatures reached 29 degrees centigrade ambient and 35 degrees on the ground.

Pirelli best result since its return to the WRC
Newsroom