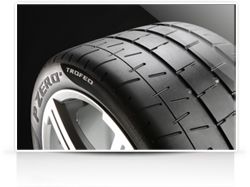 The Subaru, prepared by TEG Sport and driven by Mark Higgins, flew around the 37 mile long closed demonstration lap of the Snaefell Mountain Course in just under twenty minutes, clocking an average speed of 113mph, considerably faster than the record-holder British Rally Champion Tony Pond. On 6th June 1990, Pond teamed up with Austin Rover and, in a Rover 827 Vitesse, they became the first ever production car and driver to average over 100 mph around the Isle of Man TT Motor Bike Circuit. Until yesterday, this feat had never been equalled. Paul Hembery, director of motorsport at Pirelli, comments: “The Subaru was driven on Pirelli P Zero Trofeo tyres. These are road-legal track tyres that are designed for high performance driving. When Pond set the record in 1990, he drove on slicks, which will have enabled him to set a fast pace while sticking to the winding roads. However, it takes a seriously good road tyre to achieve grip and control at speeds of up to 170mph, which is what Mark achieved yesterday.” As a former test driver for Subaru, Mark has a long association with the factory. The car used to break the TT lap record is not the rally version, but a standard production US-spec Subaru WRX STI fitted with essential safety enhancements such as a roll cage, race seats and harnesses. “The car is as close to a production car as you can get, while remaining safe for the challenge,” continues Paul. “Yes, Tony Pond’s car was too, but at these speeds tyre choice makes a huge difference and he was on slicks, which are illegal on British roads. Beating the record on road-legal Pirelli P Zero Trofeos shows how far our tyre technology has come on in the last twenty years.” The International Isle of Man TT (Tourist Trophy) Race is a motorcycle racing event held on the Isle of Man and was for many years the most prestigious motor-cycle race in the world. The race is run in a time-trial format on public roads closed for racing by the provisions of an Act of Tynwald (the parliament of the Isle of Man). Subaru recently signed a three-year deal as the official car sponsor for the TT, providing the latest Subaru models for use by the TT organisation to help manage the running of the event, including the course inspection and roads open and roads closed duties. For further media information, please contact: Rebecca Jones on Rebecca@mediatica.co.uk or +44 (0) 7545 914651