The most exclusive drivers’ club in the world uses Pirelli tyres. The number of tyres supplied to the Ferrari Racing Days at the Nürburgring has now reached an important milestone, while the new intermediate tyre also makes its debut.

These tyres have a lot in common with the P Zero covers supplied to Formula 1, underlining how the tyres for the XX programme are directly derived from the highest levels of Pirelli Motorport’s technology. 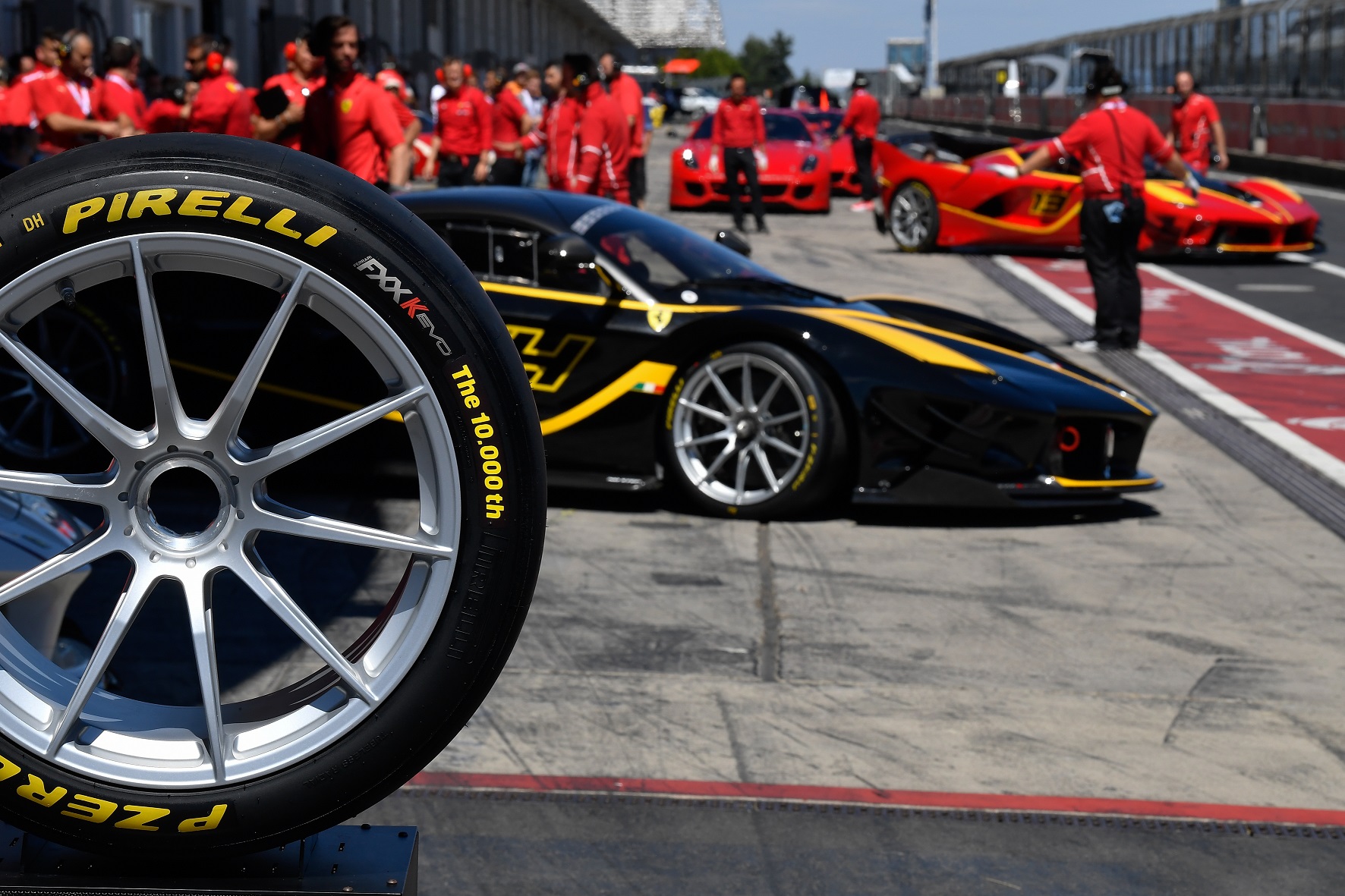 Milan, 8 July 2019 – At the latest Ferrari Racing Days event in the paddock at the Nurburgring in Germany, a very special tyre was on display: the 10,000th Pirelli P Zero created for Ferrari’s XX programme. The FXX, FXX EVO, 599XX, 599XX EVO and FXX K (with its latest Evo variant) are the most exclusive cars in the world: derived from roadgoing models and developed for track use. The base cars are already incredibly quick, but circuit racing modifications from Maranello’s engineers then make them even more extreme. The FXX-K Evo, for example, already exceeds 1000 horsepower, and to equip cars with so much power, Pirelli has developed tyres specifically designed for each model. In Germany, the number of these special tyres made reached 10,000 since 2011: the year that Pirelli became exclusive supplier to the XX programme.

From the very first car in the XX programme, the FXX, to the most recent FXX-K Evo, the development methodology has changed dramatically. In the beginning, the development process was more traditional, using the P Zero tyres created for the Ferrari Challenge one-make series as a starting point for the more extreme FXX tyres. For the latest cars, the development process now mirrors the methodology used to make P Zero Formula 1 tyres. As well as on-track testing, Pirelli’s engineers have also been able to rely on data acquired from Scuderia Ferrari’s simulator – which is also used at the very highest levels of motorsport.

With the tyre developed for the FXX K as a base, Pirelli’s engineers were able to create a tyre in fewer than six months that was capable of dealing with the enormous downforce loads generated by the latest Evo aerodynamic package (in excess of 800 kilograms at top speed). At the heart of this latest development path were new P Zero rear tyres that now feature a more even contact patch even when the Evo’s rear wing is generating maximum downforce. This helps to ensure excellent stability in terms of more balanced wear and more transparent drop-off, which contribute to more predictable handling and so greater safety, regardless of the driver’s experience. Furthermore, the tyres for the XX programme have to offer very wide working windows, in order to ensure similar levels of performance on very different circuits all over the world, with varying asphalt and often unpredictable weather. The 2019 programme, for example, began in February with the sandy corners of Bahrain and will conclude at the up-and-down Mugello circuit in Italy, at the end of October.

Another important innovation for Ferrari’s XX programme makes its debut at the Nürburgring: for more complicated driving conditions, the new Cinturato intermediate tyre will be available. This tyre uses the same construction as the slick tyre for dry conditions but introduces a directional tread pattern design as well as a new compound. This new tyre will allow drivers to get the most of these ultra-powerful cars from Maranello even on damp surfaces or in low temperatures.

THE P ZERO TYRES FOR THE XX PROGRAMMES

The cars for the XX programme feature special tyres for each model, which are different in specification and size. The range goes from a 255/650 R19 tyre for the front of the FXX to 345/725 R20 for the rear of the FXX K Evo. These can be distinguished visually as well, because each tyre bears the name of the car it’s destined for on the sidewall. Just like Pirelli’s other motorsport tyres for GT racing, these XX programme tyres are also made in a dedicated factory at Izmit in Turkey, where Formula 1 tyres were produced for many years.