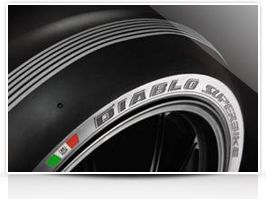 On the occasion of this important anniversary the Italian company with headquarters in Milan has designed an exclusive version of the tyres the riders will use for Superpole on Saturday with six silver coloured stripes on the tread pattern and a celebratory tag on the side with the Italian flag containing the 25 years logo In 2012 the World Superbike Championship, first held in 1988, celebrates its 25th anniversary and Pirelli, present in this prestigious competition from its inception and sole supplier for it since 2004, has decided to honour this important event by creating an exclusive version of the Superpole tyre the riders will use at Monza on 5 May, to decide the starting order for the races on Sunday 6 May. The Diablo Superbike tyre with the supersoft Superpole compound, in this exclusive “Silver Stripes” version, has six silver coloured stripes on the tread, the colour traditionally associated with 25 year anniversaries, and a label on the side which depicts the Italian flag and the commemorative logo designed by Infront to celebrate the World Superbike Championship's quarter of a century milestone. “All of our knowledge begins with experience, just as knowing means remembering, and so we remember when we at Pirelli got back into world motorcycle competitions: this was after years of minor activity and the historical Grand Prix races with Gilera, Guzzi, etc. had been forgotten ” said Giorgio Barbier, Pirelli Moto Racing Director and part of the Superbike project from its start at the end of the 1980's, “...after the first slicks evolved in the early eighties on a National and European level, diving into the new World Superbike adventure in 1988 was a choice of passion and courage. We chose team Rumi, outgoing World champion and its rising star, American rider Fred Merkel. A hard year, full of excitement, disappointments and successes: a championship which was won in the last round in New Zealand against Mertens who would later go on to become a Pirelli rider. Sin ce then, the Pirelli sports identity in the motorcycle world has once again been a culture of constant undertaking and commitment.” The long partnership with World Superbike has allowed Pirelli to develop a series of products which have been exemplified for 10 years in the Diablo range and which are continuously updated thanks to the factory derivatives platform. The experience gained there guides many current choices: Motocross, Enduro, as well as Rally and finally a return to F1 send a clear signal of what Pirelli's commitment is in the Motorsport world. “This” adds Barbier, “is certainly a very important milestone, not only for Infront Motor Sports and the World Superbike Championship, but for the entire two wheeled sport competition world. In spite of the economic crisis during the 1990's and in recent years, the World Championship continued to grow consistently both in terms of visibility and prestige, carving out a major role for itself in international motorcycling. The Flammini brothers' project showed itself from the very beginning to be a winner, attracting important riders that would go on to become legends. Pirelli believed in this project from the beginning, and from 2004 they were chosen as sole official supplier for all four classes of World Superbike, adding their contribution to the excitement that these races provide fans every weekend. We are therefore pleased to be able to celebrate this event together with Infront and all the others involved and we are confident that the World Superbike Championship will continue to grow in the years to come”.

For further evidence of the important role Pirelli has in increasing the quality of the show provided for the World Superbike Championship fans, one needs only to think that, since the beginning of Pirelli's involvement as sole tyre supplier, the championship title has been decided an amazing three times in the last round of the season (in 2004, 2007 and 2009) and five times during the penultimate weekend. While in the open championship (pre-2004) only three manufact urers managed to earn the title in more than 16 years, in 8 years of single tyre seasons, 5 of the 8 motorcycle manufacturers participating (including Petronas) earned at least one title: Ducati, Suzuki, Honda, Yamaha and Aprilia. Thanks to the continuous improvements in tyre performance, from the first season the average race times have decreased year after year, determining an average reduction in race time of -0.3 second per year. About 30 Pirelli patents stem from the WSBK experience, patents that have to do with various aspects of tyre technology and which effect the increase of the contact area (EPT), tread design, compounds and processes. Many of the latest products introduced on the market, such as the Diablo Supercorsa SP, Diablo Rosso Corsa and the Diablo Rosso II, contain elements which are drawn from these technologies in order to provide more advanced products to the consumer for use in daily riding, whether on or off the track.