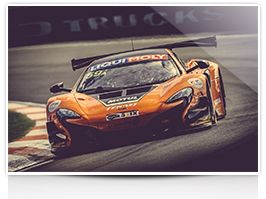 Pirelli has claimed the ‘Grand Slam’ at the Bathurst 12 Hours in Australia: pole position, fastest race lap, and race victory. In qualifying, Pirelli tyres established a new lap record of 2m01.286s over the epic Mount Panorama circuit and then also set a new race lap record of 2m01.567s, crowning a brilliant weekend for the Italian manufacturer. The Tekno Autosports McLaren 650S GT3 of Shane Van Gisbergen, Alvaro Parente and Jonathan Webb dominated the weekend from start to finish, claiming Pirelli’s first win in Bathurst and McLaren’s most significant endurance racing victory since it triumphed overall at Le Mans in 1995. The drivers used the latest evolution of Pirelli’s medium compound DMC P Zero tyre, which demonstrated performance and consistency both during long stints and short stints, throughout a wide range of temperatures. In a race contested by a variety of different tyre manufacturers, the Pirelli rubber demonstrated a significant performance advantage. This is why Pirelli has been chosen by the world’s top supercar and prestige manufacturers to equip their leading models. “I knew that the tyres would be good, but I didn’t think they would be that good!” said New Zealander Van Gisbergen, who brought the number 59 McLaren home in his own biggest career success to date. “The car was the fastest all weekend: any time I needed a gap, I just stuck the knife in!” Despite its clear speed advantage, the winning McLaren had to contend with an electrical problem that cost nearly a minute in the early stages of the race, and a penalty for speeding in the pit lane that cost 30 seconds. This year’s Bathurst 12 Hours also set a new distance record, underlining the durability as well as the performance of the P Zero. Pirelli additionally won the Am category as well as two of the lower classes. Matteo Braga, Pirelli’s circuit activity manager, commented: “It was a fantastic weekend for our tyres, which played an instrumental role in securing pole position and the race win at Bathurst, as well as lap records in both qualifying and the race. The fact that the race lap record was only a few-tenths of a second off the qualifying lap record underlines the sheer pace and competitiveness of the race. We had dry conditions but quite a wide variety of temperatures, as the race started early in the morning and then finished in the late afternoon. Throughout all these conditions, during both long and short stints, our tyres demonstrated unbeatable pace. Congratulations to Shane, Alvaro and Jonathan, as well as everyone at McLaren and Tekno Autosports.” The next round of the Intercontinental GT Challenge takes place at the Spa 24 Hours in Belgium from July 28-31.

PIRELLI AMONG SIGNATORIES OF CFO PRINCIPLES FOR INTEGRATED SDG INVESTMENTS AND FINANCE LAUNCHED BY THE UN GLOBAL COMPACT CFO TASKFORCE
2020 Russian Grand Prix - Preview
An eventful weekend at Montmeló: Andrea Locatelli is WorldSSP World Champion; three different manufacturers win in WorldSBK; outstanding performance by Gerloff who takes the American flag to the podiu
In WorldSBK Jonathan Rea owns the show on the Barcelona – Catalunya circuit; outstanding performance for Pirelli tyres on this brand new circuit in both dry and wet conditions
Pirelli is preparing to face the Circuit of Catalunya: with standard and development solutions for WorldSBK as WorldSSP sees a new rear development solution in a soft compound
PIRELLI UNRIVALLED IN MOTOCROSS AT THE GRAND PRIX OF EMILIA ROMAGNA IN FAENZA
×