Pirelli has claimed a one-two finish in the fiercely contested two-wheel drive class of the Tour de Corse: the legendary rally that forms the third round of the Intercontinental Rally Challenge this year. Local driver Pierre-Antoine Guglielmi won the category, ahead of Italian driver Stefano Albertini. 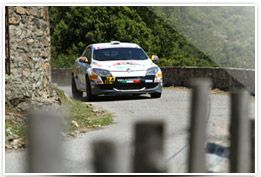 Driving a Renault Clio R3, Guglielmi took the lead of the category on the opening day. He ended up an excellent 12th overall ahead of several more powerful cars, after three days and 14 stages totalling 320 competitive kilometres. Albertini, the winner of the Italian Renault Clio Trophy last year, finished 16th overall in his new Renault Megane RS, which is enjoying its debut season in 2011 together with Pirelli: the official supplier to Renault’s factory rally programmes and one-make series. Guglielmi made no mistakes throughout the all-asphalt event, which took in stages around Calvi and Corte as well as the famous stages close to Ajaccio that have been used in recent years. The talented Corsican, who has won several national rallies but never up to now claimed his class on the Tour de Corse, commented: “It’s been a fantastic rally and I’ve really enjoyed it. The tyres really helped me to be competitive: I found that they were up to temperature very quickly and this meant that I could push hard from the very beginning of each stage.” Albertini also complimented the Pirelli PZero rubber, which has been developed with the same technology that has powered Pirelli to 181 World Rally Championship victories and 25 titles. “It was a very tricky rally as we had a few problems but it was also a great experience for me,” said Albertini. “The tyres performed very consistently throughout the whole of the event, and even though I am still learning the car they gave me a lot of confidence on very varied surfaces, which form some of the most challenging stages in the world.” Both Renault drivers used Pirelli’s RX tyres: a tried and trusted product that is fitted in 17-inch size to the Clio and 18-inch to the Megane, designed to provide maximum traction and grip on dry asphalt. Pirelli’s Motorsport Director Paul Hembery commented: “Congratulations to Pierre-Antoine Guglielmi and Stefano Albertini, who performed brilliantly using our tyres on stages that have formed part of rally legend. Their domination of the two-wheel drive class underlines the performance not only of our tyres but also of Renault, whom we are very pleased to have as a partner. While we are now in Formula One, our passion for rallying remains undiminished, which is why we are particularly pleased to seal this two-wheel drive victory.” For more information about Pirelli, please contact Anthony Peacock on +44 (0)7765 896 930 or anthony@mediatica.co.uk