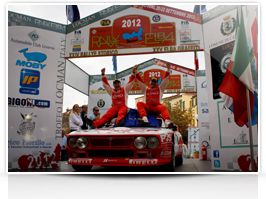 Pirelli has claimed the most important historic rally title in the world – the FIA European Historic Rally Championship – as well as the Italian Historic Rally Championship on the Rally Isola d’Elba last weekend. The European Historic Rally Championship was won by Massimo Pedretti in a Lancia 037 run by Key Sport, with the legendary car claiming its first major title in 25 years. This has continued Lancia’s tradition of winning exclusively on Pirelli tyres: a key ingredient in making Lancia the most iconic team in the history of the sport. Pedretti, co-driven by Marco Verdelli, also won the 12-stage all-asphalt event overall, going fastest on seven stages. The Italian Historic title was clinched by the Group 4 Porsche 911 – another legend of the sport – run by the Pentacar team and driven by multiple champion Lucio De Zanche. With a notable advantage in the standings, fifth in class and eighth overall was enough for De Zanche to secure the title. Both cars were equipped with Pirelli P7 Corsa Classic tyre, which was introduced earlier this year and has supplied title-winning pace on its debut. The P7 Corsa Classic takes its name from the classic range of rally tyres introduced by Pirelli in the 1970s. As the very first low-profile tyre seen on the World Rally Championship, the P7 broke new ground and soon become an industry standard. The title-winning P7 Corsa Classic takes all the strengths of the original P7 tyre, but re-interprets them with modern technology to deliver all the benefits of the latest advances in performance and safety. Pirelli’s product manager Terenzio Testoni commented: “Congratulations to Massimo and Lucio on these well-deserved titles, which highlight the qualities of our new P7 Corsa Classic. The Lancia 037 and Porsche 911 could not be more different in terms of design but the P7 Corsa Classic worked extremely effectively on both cars, as one of its key objectives is to make cars with even the highest power outputs easier to control, enhancing safety as well as performance. With an asymmetric tread pattern and all our know-how behind it, this tyre has brought a new dimension to historic rallying, helping some of the most iconic cars in the sport to win again decades after they were retired from factory competition. We’ve seen a wide variety of surface and weather conditions this year, but both in the wet and in the dry, our new tyre has shown winning pace.” The P7 Corsa Classic compounds comprise D3 (for dry conditions) D5 (for mixed conditions) and W5 (for wet conditions). The versatility of the P7 Corsa Classic is its biggest strength, with just one unique tread pattern being suitable for a wide variety of weather and road conditions, as demonstrated throughout the 2012 season.