The partnership between the tyre company and the World’s most successful domestic motorcycle racing series, which started in 2008 and is now enhanced by this further five year renewal, confirms the role of Pirelli as the most important tyre supplier for international and local motorsport championships

During a press conference held today at Silverstone Circuit, Pirelli has been confirmed as the Presenting Sponsor and Sole Tyre Supplier for the MCE British Superbike Championship for the next five years, as the series looks to build on the success and stability of their partnership since 2008. This agreement therefore confirms Pirelli in its current role of Sole Tyre Supplier until the end of the 2020 season. 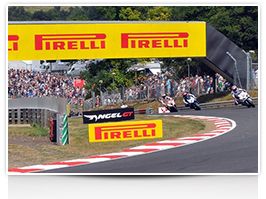 Pirelli won a competitive five-year supply tender organized by MSVR (MotorSport Vision Racing) for this prestigious motorsport series, after proving to offer high-performing, consistent tyres alongside logistical expertise over the last eight seasons. The agreement covers the Superbike, Supersport, Superstock 1000 and 600 classes, plus one marque races (such as the Ducati TriOptions Cup). The series organisers MSVR look to retain the consistency and fairness that this control supply relationship has given, with any changes to tyre specification taken in consultation with teams, well in advance of implementation. The agreement also continues the link between World and British Superbikes, with the International series introducing a ground-breaking agreement with Pirelli for single tyre supply back in 2004. The success and stability of that relationship was a major factor in convincing MSVR to undertake a single tyre supply system in BSB in 2008. 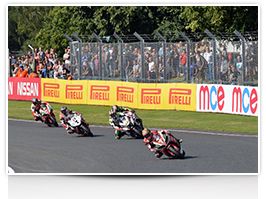 Giorgio Barbier, Racing Activities Director of Pirelli’s Business Unit Moto and Head of Superbike project for the Milanese Company since 2001, said: “Pirelli is very happy to continue their adventure in this prestigious championship for the next five seasons and to carry on the successful partnership with MSVR. Introduced to the series in 2008 with the primary purpose to reduce the overall costs for teams in the championship, ensure a fairer tyre supply and provide a level playing field, whilst ultimately providing even closer, more thrilling racing. The single tyre formula proposed by Pirelli has since the beginning increased quality and competitiveness, enabling all the riders, teams and motorcycle manufacturers participating to compete for success in the Championship. Year after year BSB has become a reference for all the other national championships and has also created some of the most important riders in the yearbook of the Superbike World Championship. The relationship between the production bike derived World Championship and the British Superbikes has always been strong as we can also notice from the nationality of the first four riders in the World Superbike Championship standings this year. They are all UK riders and all with a past in BSB and for us this is an important message: we will continue supporting promising riders, offering them the chance to do wild cards in some rounds of World Superbike so that they will have the possibility to show their talent to a worldwide audience.” 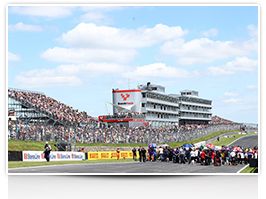 Stuart Higgs, Series and Race Director of the MCE British Superbike Championship, added:“We are delighted to confirm Pirelli as the Sole Tyre Supplier and Presenting Sponsor after what has been a competitive tender process. This marks the eighth season working together and in that time we have witnessed a level playing field for riders and teams, combined with a great consistency of product. This year especially we have seen lap records fall spectacularly, which is particularly impressive when you think we have no electronic aids in BSB and that these times have all been achieved on production tyres. We look forward to another five years of working with Pirelli not just on the track but with continued innovative marketing campaigns to strengthen the link between BSB and Pirelli.” Pirelli develop their DIABLO™ Superbiketyres at Superbike World Championship which then become production tyres and can be purchased by any racer or track day rider. It is these production tyres which are utilised at British Superbikes, displaying most effectively Pirelli’s long held philosophy; “We race what we sell, we sell what we race”. With the introduction of 17” tyres into the BSB paddock in 2014, the link between road and production race tyres has never been closer. The 2015 race season has seen new lap records achieved on these production tyres at no less than seven events so far, often late in races, illustrating the tyres outright grip and durability.

The MCE Insurance British Superbike Championship has experienced unprecedented growth with global TV coverage and massive crowds flocking to the twelve round series, held at circuits as diverse as Brands Hatch, Silverstone, OultonPark, CadwellPark, DoningtonPark, Snetterton, Thruxton, Knockhill in Scotland and Assen in The Netherlands. The paddock boasts 200 riders across the various Pirelli supported classes and competition is fierce as riders aim for success and international recognition.

The role of Exclusive Tyre Supplier of the FIA Formula One World Championship® and the eni FIM Superbike World Championship, in addition to the important efforts in the Rally, Motocross and Endurance World Championships, as well as the most important two and four wheel motor local competitions such as the MCE British Superbike Championship, demonstrates the passion and dedication that Pirelli has always placed in sporting activities, confirming an important feature of the DNA of this historic tyre brand. More details on Pirelli’s full range of tyres at www.pirelli.com/motorcycle. Follow Pirelli in British Superbikes and beyond on Facebook at www.facebook.com/PirelliMoto and Twitter @PirelliMoto. For more circuit and BSB information visit www.britishsuperbike.com.