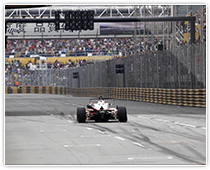 Pirelli has been appointed as exclusive tyre supplier to the prestigious Macau Grand Prix for the first time this year, equipping both the FIA Formula 3 World Cup and the FIA GT World Cup from 17-20 November. Currently Pirelli supplies around 170 car championships all over the world, approximately 100 of which are exclusive supply agreements. The races will take place at the famous Macau Guia Circuit in the Far East: combining a 6.120-kilometre lap that is extremely fast and narrow with limited run-off area and a slippery street surface. Pirelli now succeeds the previous tyre supplier for the Formula 3 World Cup at Macau that held the FIA-sanctioned contract since 1983, completing the Italian firm’s renowned ladder of talent that can take young drivers all the way from karting, through Formula 4, and right up to Formula 1. Pirelli currently supplies a single-compound P Zero F3 tyre for a variety of global Formula 3 championships from Italy to Brazil. This tyre is specifically tailored to the demands of a Formula 3 car, striking the right compromise between performance and durability. The same size is also used for Formula 4: the stepping-stone to Formula 3, and a Cinturato wet tyre is available to cater for wet conditions. The FIA GT World Cup – which acts as a showcase for GT manufacturers and drivers all over the world – was previously supplied by Pirelli during its debut last year, featuring the best endurance racers in the sport. For GT racing, Pirelli supplies a variety of tyres to different global championships, including its advanced P Zero DHC tyres for the Blancpain GT Series that were introduced last year. These are again available in just a single compound but have proved to be more than capable of coping with a wide variety of conditions, race tracks, and vehicle architectures. There is also a WH tyre for wet conditions.