Having recently secured a record fifth manufacturers championship with Peugeot Italia on the Italian Rally Championship, the Italian tyre firm will equip the French constructor once more in 2014. The agreement extends the enduring collaboration into a new era from next year onwards, as multiple champion Paolo Andreucci takes the wheel of the all-new Peugeot 208 T16 R5 car, equipped with the latest generation of Pirelli's rally tyres. Peugeot Italia's Eugenio Franzetti commented: "We are proud and pleased to continue our partnership with Pirelli for the sixth consecutive year. It's proved to be a winning combination, with a fantastic development team and rally team. Next year will be the debut season for the 205 T16, and together with Paolo Andreucci, Pirelli and the Racing Lions team, we will shortly be embarking on an intensive test programme. We're confident that as always Pirelli will supply us with competitive and reliable tyres. Our common objective will be to ensure that the 208 T16 is a winning package and a benchmark in the world of rallying." Pirelli has established itself as the dominant force on the Italian Rally Championship – a series that traditionally runs with open competition among a variety of well-known tyre manufacturers – on rallies that include both asphalt and gravel surfaces, in hot and cold conditions. The new generation R5 cars have performance that is close to the World Rally Cars seen on the World Rally Championship, which Pirelli will also supply next year. This places extreme demands on the tyres, which have to work effectively in an extremely wide range of road and weather conditions. The lessons learned from rallying have an important effect on road car products: the low profile tyre, for example, was first developed by Pirelli as a concept for the Lancia Stratos rally car in the 1970s. Pirelli's product manager Terenzio Testoni commented: "We're delighted to be working with Peugeot Italia and Paolo Andreucci once again next season, and I think the results we have achieved together over the years speak for themselves. As well as the manufacturers title that Peugeot won this year with an R2 car, we are confident that Paolo will be able to challenge for another drivers title with us next year. Our aim as always will be to give him the best possible tyres to enable him to do that, and in fact we have already started testing for next season. Our products are constantly evolving as the result of our emphasis on research and technology - a hallmark of Pirelli - and next year we shall be introducing some important new innovations that will allow our drivers to make the difference. We’ll be carrying out some more tests between now and the end of the year in order to further adapt our product to the new car." As well as equipping the Peugeot Italia factory team, Pirelli also supplies Peugeot's well-known one-make series throughout Europe. Ends For more information about Pirelli, please contact Anthony Peacock on +44 (0)7765 896 930 or anthony@mediaticaworld.com 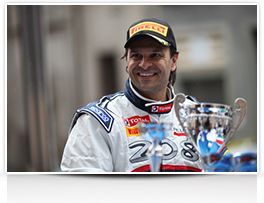