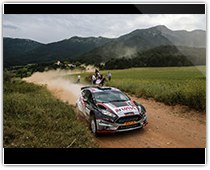 The top drivers in the FIA European Rally Championship are set to kick off the second half of the 2016 season. Pirelli driver Kajetan Kajetanowicz continues to lead the challenge in his LOTOS-backed Ford Fiesta R5 as he bids to successfully defend the title he won last year. He began his campaign in style, taking two second-places and a third. A Pirelli driver is also second in the championship, with Alexey Lukyanuk returning for more ERC in 2016 after finishing third in the championship last year. Stepping up to a Ford Fiesta R5, Lukyanuk won the opening round of the 2016 FIA European Rally Championship and finished second on the Azores Airlines Rallye. Lukyanuk sits second in the ERC standings, just 15 points behind Kajetan Kajetanowicz. Pirelli’s rally activity manager Terenzio Testoni commented: “We’ve maintained the overall lead in the European Rally Championship and won all the stages apart from two. We’ve had three very different types of event so far on the European championship, on both old and new asphalt as well as gravel, but the consistent hallmark is that Pirelli is always at the forefront of the action.”