Round ten of the FIM Motocross World Championship falls to the Pirelli Scorpion MX with success in MX1, MX2 and EMX250 Round ten of the FIM Motocross World Championship saw an exciting fixture for Pirelli as the Scorpion MX swept podiums in the MX1 and MX2 classes and grabbed the first two positions of the European EMX250 category. The premier division MX1 was another happy hunting ground for series leader Antonio Cairoli who returned from defeat at his home Grand Prix two weeks ago with a superb double moto haul that consolidated his advantage at the top of the MX1 standings and with a bigger margin over main rival Gautier Paulin; the Frenchman could only finish fifth. The Sicilian fronted team-mate and other Pirelli runners Ken De Dycker and Suzuki’s Clement Desalle. MX2 was once more the domain of Jeffrey Herlings, who recovered from a first moto first corner crash to reach third position and then later in the day eased to another comprehensive victory in the second race. The works KTM representative beat the surprising figure of Christophe Charlier - grasping the chequered flag in the first sprint - and also team-mate Jordi Tixier who flew to the runner-up slot in the second moto to assist Herlings’ tenth triumph in a row. Also noteworthy was Alex Lupino. The Italian rallied back from some bad starts in fine form to finish fifth overall. 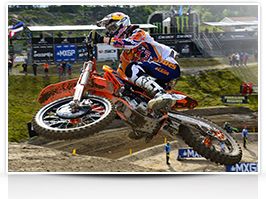 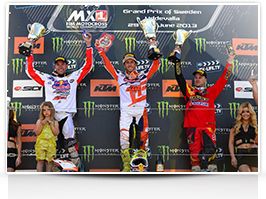 Pirelli Scorpion MX tyres were also used across the bumpy hard-pack on the KTM of Valentin Guillod and that of Damon Graulus; first and second respectively in the third fixture of the EMX250 championship. “It’s been a really positive day,” commented Pirelli Racing Service Manager Giovanni Gatti. “We have taken eight of the nine podium spots. All the riders used Scorpion MX MidSoft 32F front and Scorpion MX MidSoft 32 rear. The only variation was for the factory Suzuki guys in MX1 who preferred to tackle the dirt with a 120/90 dimension on the rear tyre compared to the 110/90 selected by everybody else. In MX2 Herlings was the only one to also use 110/90 on the back.”