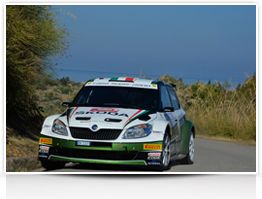 The 55th Sanremo Rally, the jewel in the crown of the Italian Rally Championship, forms the final round of the series as well as being the penultimate round of the European Rally Championship. This means that the regular Italian Rally Championship crews equipped by Pirelli, including newly-crowned champion Umberto Scandola, driving for Skoda Italia, as well as Peugeot Italia star Paolo Andreucci will be up against the best crews from all over Europe, such as former Monte Carlo winner Bryan Bouffier and rising Finnish star Esapekka Lappi, as well as Ireland’s Craig Breen. The crews face 10 stages this year, on the tight and twisty stages above the town of Sanremo, whose event used to host a round of the World Rally Championship until 2003. The biggest challenge on this year’s rally will be the mammoth 55-kilometre night stage run in the dark on Friday night – which is even longer than the same stage last year, and the longest stage currently used in Europe. As well as providing a real test for the cars and the drivers, it offers a massive challenge for the tyres, which have to deliver peak performance for over half an hour on a road that is a continual series of corners. While the drivers’ titles are settled both on the Italian and the European Championship, the Italian Championship for manufacturers’ is still open, with both Peugeot and Skoda in contention. Peugeot enjoys an advantage heading into the final round, but Scandola and Skoda are determined to stop Andreucci racking up his third win in Sanremo. Scandola, who has never yet won the Ligurian event, said: “Our chances of taking the constructors’ title are relatively small, so we’re just going to try as hard as we can and if it comes, all the better. Mostly we’re just going to be focused on driving our own rally, which is always a huge challenge in Sanremo. Today [Monday] we’re completing a tyre test to try out the tyres that we’re going to use on the rally, and now we have new regulations that mean every 18-inch asphalt tyre has to have grooves in so it will be interesting to see how we can deal with that, although I have a lot of confidence in the Pirelli tyres even when conditions are marginal. The biggest test will obviously be the long stage and a large part of our tyre test will concentrate on that. We still don’t know which tyres we’ll be using for that: obviously a lot of that will depend on the weather, which is often marginal around Sanremo at this time of year. It’s certainly going to be very exciting competing on this legendary rally against the cream of the European Rally Championship.” Pirelli will bring its latest RX5 tyre for longer and moderately abrasive stages and the RX7 for short and smooth stages. The RX9 tyre will also be available for very cold and extremely slippery conditions, which could present themselves late at night. The RX family of tyres is among the most versatile in Pirelli’s competition range thanks to a lightly grooved tread pattern, a square profile and a particularly rigid structure. This gives it unsurpassed levels of grip and driveability, contributing to Pirelli’s impressive track record in Sanremo. Other Pirelli drivers on the event include Alessandro Perico and Stefano Albertini, who will each drive a Peugeot 207 S2000. Andrea Crugnola will also be aiming to wrap up the Italian junior title in a Renault Twingo R2. Pirelli’s product manager Terenzio Testoni commented: “Sanremo is certainly the biggest challenge that our tyres face all year in Italy, for several reasons: the demanding nature of the stages, especially the long stage, the changeable weather and also the fact that we are against very strong opposition from the European Rally Championship. We need the highest possible levels of performance and durability from a tyre to succeed, but our winning record in Sanremo – including the rally win last year – speaks for itself. We’re feeling confident that we have the ability to make the difference again this year.” The rally starts on Friday afternoon at 14:00, with competitors tackling three stages prior to the epic night stage. The remaining six stages take place on Saturday before the finish at 18:04, following 227.55 competitive kilometres. Ends For more information about Pirelli, please contact Anthony Peacock on +44 (0)7765 896 930 or anthony@mediaticaworld.com