Pirelli enjoys the action at Hockenheim

Pirelli has enjoyed an action-packed weekend at Hockenheim, round five of the inaugural GP3 series. The two races were characterised by incidents, accidents, and changeable weather - which meant that the rain tyre was used on Friday and Saturday during free practice and qualifying for the first time. 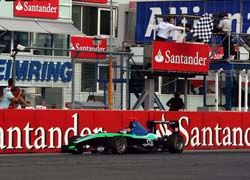 Despite the wet weather, thousands of fans turned up to see the action as usual. The circuit is fast and technical, featuring quick straights but also an extremely twisty and technical stadium section. The first corner in particular, which was extremely slippery, caught out several drivers in the challenging wet conditions. Drivers used the rain tyre in practice and qualifying. As expected in the torrentially wet conditions, drivers faced a battle to stay on the track. Nonetheless, the first race was dry, enabling Canada's Robert Wickens to seal his first GP3 victory from James Jakes, who started on pole. Race two was also held in dry weather. With the two races using a dry track for the first time during the weekend the drivers had very little time to reacquaint themselves with the medium compound tyre, used for the opening two GP3 meetings in Barcelona and Istanbul. Nonetheless, Esteban Gutierrez took his fourth GP3 win in race two to extend his championship lead from Alexander Rossi. ART Grand Prix continues to lead the team's rankings with three race meetings left to go. Hockenheim formed the venue for round 11 of this year's Formula One World Championship, giving the 30 talented youngsters who compete in GP3 the chance to display their abilities in front of some of the most influential people in motorsport. With identical Renault-engined Dallara chassis producing 280 horsepower, the accent is firmly on driving performance. Pirelli's Racing Manager Mario Isola commented: "This was far from a normal weekend for everyone, with the most uncertain weather that we have seen at any GP3 race meeting so far. Although we have tested with our wet weather tyres, this was the first time that they have been used in practice and qualifying so we were very pleased to assess their performance in competitive conditions. We were very happy with what we saw, as it is clear that the rain tyres are very competitive. With the weather drying up for the two races, the drivers had very little time to adapt themselves to the medium-compound dry tyres on this circuit, but once again our tyres were stable and consistent enough for all the drivers to be quickly on the pace. We've seen another very exciting race weekend, and naturally we are very proud to be associated with this formula that will undoubtedly produce some stars of the future" The next two races of the eight-round GP3 Series take place at the Hungarian Grand Prix in Budapest next weekend from July 30-August 1. This is the first time that a GP3 race meeting has run on consecutive weekends, adding an extra logistical challenge for Pirelli: which will also supply GP2 and Formula One next year.
Newsroom

Pirelli enjoys the action at Hockenheim

PIRELLI PRESS RELEASE
Pirelli is ready to face Portimão for the third round of the MOTUL FIM Superbike World Championship
2020 British Grand Prix - Race
At the Pirelli Spanish Round in Jerez Rea takes the Superpole® Race while Redding wins Race 2, Locatelli does the double in WorldSSP. The winning solutions in the Superbike range are confirmed, used b
2020 British Grand Prix - Qualifying
WorldSBK Pirelli Spanish Round Race 1: Scott Redding takes his first Superbike win, outstanding performance by the tyres in spite of the high temperatures
×