Pirelli equips 63% of prestige cars at the Geneva Motor Show 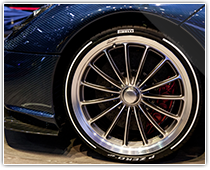 Pirelli comes to the 87th Geneva International Motor Show, equipping the most prestigious and eagerly-anticipated models with bespoke tyres. The Italian company confirms itself once again as the undisputed leader in terms of Original Equipment for the top end of the market. As seen at each edition of GIMS, many of the most prestigious autos presented have chosen to wear Pirelli, showing once again the strong bond between Pirelli and top names of the automotive industry. More than 60% of prestige cars exhibited at the Swiss show - from McLaren to Pagani passing through Porsche - are equipped with Pirelli tyres, many of which are part of the Pirelli Color Edition launched in Geneva. This statistic is particularly important, knowing that the nearest competitor equips 24% of the cars. The share of cars equipped with Pirelli tyres has increased by 21 points compared to last year consolidating the leadership of the company in the prestige segment. Pirelli's presence in the premium segment is also significant, with more than 35% of all equipment. As a result, Pirelli strengthens its presence in Geneva, confirming Italian tyres as the preferred choice of the most prestigious automakers in the world. This year as well Pirelli is present at the Geneva International Motor Show with a stand dedicated to announcing its two latest 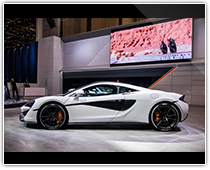 innovations: Pirelli Color Edition and Pirelli Connesso. Pirelli Connesso is a platform integrated into PZero and Winter Sottozero tyres available to the replacement market which communicates with the drivers via an app, thanks to a sensor embedded in the internal wall of the tyre. This app supplies information on how the tyre is working as well as offering a series of personalized services. Pirelli Connesso will be available  in the United States from summer 2017 and then in the principal European markets.