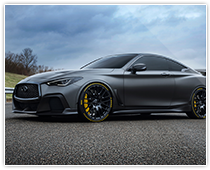 INFINITI and Pirelli will collaborate on Project Black S, a venture between INFINITI and its Renault-Nissan Alliance partner, Renault Sport Formula One Team. Pirelli will equip the Black S with P Zero tyres, also available as part of the Pirelli Color Edition. Just as in Formula One, there are coloured markings on the sidewalls, in line with Pirelli’s perfect fit strategy. Unveiled in March 2017, at Geneva International Motor Show, Project Black S explores the potential of a future performance grade for INFINITI, Pirelli’s contribution will include the design and construction of bespoke tyres developed exclusively for Project Black S. Suggesting a radical reinterpretation of the INFINITI Q60 coupé, the Project Black S features a stand-out, aerodynamically-optimised new design. It also hints at how a performance hybrid powertrain – developed in close collaboration with the Renault Sport Formula One Team – could significantly enhance the performance and dynamics of an INFINITI production car. Pirelli was attracted to the Project Black S as a true track-to-road technology transfer project. Thanks to its experience in motorsport and Formula One, Pirelli embarks on a new and challenging collaboration to develop dedicated tyres for a car that features outstanding performances coupled with extreme aerodynamics. Through this partnership, Pirelli’s renowned sporting DNA is demonstrated once more, guaranteeing the best compromise between performance and safety.