The Spa-Francorchamps circuit, located in the foothills of the Ardennes in Belgium, traditionally produces some dramatic races. This year was no exception, in Pirelli's first season of supplying the newly-created GP3 Series. The GP3 Series exists to train young drivers for the demands they will face at the pinnacle of single-seater racing in the future, such as Formula One, which will be supplied by Pirelli from 2011. At Spa, the champions of tomorrow learned some hard lessons. 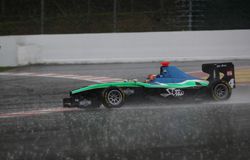 One of the defining characteristics of Spa is variable weather, and this was very much in evidence throughout qualifying and both races. Pirelli came to Spa - the seventh and penultimate round of the GP3 Series - with the medium compound PZero 13-inch tyre, designed to cope with a wide range of weather conditions. However, the rain tyre also played a starring role during the weekend at Spa, whose iconic corners such as Eau Rouge and Blanchimont have defined motorsport history. Qualifying on Saturday morning provided a taste of what was to come, as it was held on a wet track that progressively dried out. Consequently, drivers started the session on rain tyres before coming in to switch to slick tyres as a dry line emerged. "From a technical point of view it was a very interesting session, as it allowed us to evaluate the performance of our tyres on a drying track, and assess at which point slick tyres became quicker," commented Mario Isola, Pirelli's Racing Manager. The first race on Saturday afternoon was interrupted by safety cars and torrential rain. When the rain hit, nearly all the competitors dived into the pits to change to wet tyres. But pole-sitter Robert Wickens stayed out on slicks to take the lead and because of a safety car, none of the other competitors were allowed to overtake him. The Status Grand Prix driver judged his pace to ensure that the maximum permitted time limit for the race would be reached, so that it could end under the safety car and give him victory. The second race on Sunday morning was won by Adrien Tambay, the son of ex-Formula One driver Patrick Tambay. The Frenchman was quickest in Friday practice but started Sunday's race from 27th on the grid: co-incidentally the race number that his father was most famous for. Again, the race was hit by rain halfway through but Tambay managed to drive through the shower and then take advantage of his PZero slick tyres when the track dried out again. With most other drivers having chosen to pit for rain tyres, Tambay claimed a brilliant tactical victory for Manor Motorsport. "Our tyres were at the centre of the action this weekend, which featured two of the most unusual and entertaining races that we have seen so far this GP3 season," added Isola. "The performance of Robert Wickens on Saturday and Adrien Tambay on Sunday proved that our medium compound PZero slick tyres were able to stay on the road even in mixed conditions. Both drivers managed to use the rain to their advantage even while running on our slick tyres. We are delighted to see that GP3 is fulfilling its role of teaching drivers not only about close competition but also about racecraft in challenging conditions." The final two races of the eight-round GP3 series take place on home territory for Pirelli at the Italian Grand Prix in Monza from September 11-12. With the championship leader Esteban Gutierrez failing to score this weekend, Wickens still stands a chance of claiming the inaugural GP3 drivers' title in Italy.
Newsroom