Pirelli has rewarded its GP2 and GP3 drivers – the next generation of Formula One stars – with two prestigious prizeshanded out at the end of the Abu Dhabi Grand Prix weekend, which marked the final round for both series.

Pirelli has supplied GP3 since 2010 and GP2 since 2011; more than half the drivers on the current Formula One grid have come up through the ranks of the two official feeder series. Reflecting this progression, Pirelli has put in place a prize fund to help the GP3 champion step up to GP2 during the following season. Last year’s recipient was New Zealander Mitch Evans, who drove for Arden Racing this year. Now, with the GP3 championship winner Daniil Kvyat already announced as a Toro Rosso driver in Formula One, the €200,000 prize that must be used to help secure a GP2 drive next season will go to the championship runner-up Facu Regalia. 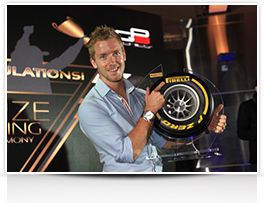 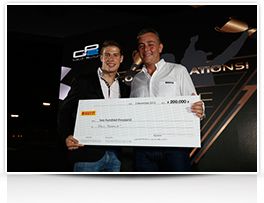 In GP2, the driver who is judged by an international panel of journalists to have made the best use of tyres throughout the season is awarded the Pirelli Trophy. This year’s Pirelli Trophy winner is Sam Bird, who took five wins for Russian Time and is also a reserve driver for Mercedes in Formula One. The Pirelli Trophy was presented to Bird by Pirelli’s racing manager Mario Isola, who also handed over the scholarship cheque to Regalia. The jury concluded that Bird maximised the capabilities of the tyres throughout the season better than anyone else, adopting a driving style that extracted the maximum from them and benefitting from some crucial strategic decisions, such as opting to change the rear tyres only in Monaco to claim a feature race win. The Russian Time driver secured another notable feature race win at Spa, from pole position. Other race victories for Bird took place in Bahrain, Great Britain and Singapore.

Receiving his trophy, Bird commented: “I’m absolutely delighted to have been given this prize by Pirelli. Getting the most out of the tyres and the strategy has been a very important part of GP2 this year, which can really make the difference in a race. That’s a challenge that we’ve really enjoyed as a team. I really hope that the recognition this prestigious award brings will boost my career prospects in future.” Regalia had a fast and consistent run in GP3 this year, winning in Germany and claiming a podium finish on five more occasions. The ART Grand Prix driver took the title race all the way to the final round, with Pirelli’s scholarship now set to help the Argentinean youngster make the next step up the ladder to GP2 in 2014. He said: “I’m obviously disappointed not to win the GP3 title but this award is a fantastic consolation. This season has been the most competitive year of motor racing I have ever experienced, with the tyres providing exactly the right compromise between performance and degradation. I’m very grateful to Pirelli for this valuable prize, which will play an integral part of my development as a racing driver.” Pirelli’s motorsport director Paul Hembery concluded: “Congratulations to Sam and Facu for some brilliant performances this year: both are worthy recipients of our prizes. At Pirelli, we believe wholeheartedly in investing in the future of motorsport, which is why supporting young drivers has always been absolutely key to our philosophy. With drivers of the calibre of Sam and Facu, the pool of talent knocking on the door of Formula One is set to go from strength to strength. We hope that what they have learned from our tyres this year will help them in their mission to go all the way to the top.” *** Copyright-free videos, photos as well as latest media news are available for editorial use from: www.pirelli.com/f1pressarea (registration required). Follow us on Twitter @pirellisport or Facebook: Pirelli Motorsport. Please also visit the Pirelli website for more information on the company: www.pirelli.com. For further information please contact: Alexandra Schieren +33 607 03 69 03 alexandra.schieren@pirelli.com Anthony Peacock +44 7765 896 930 anthony@mediaticaworld.com Francescopaolo Tarallo +39 334 684 4307 francescopaolo.tarallo@pirelli.com (Head of Product and Motorsport Communication)