This weekend the Blancpain GT Series is in Great Britain for round two of the Sprint Cup, where seven manufacturers will be represented at Brands Hatch. As exclusive tyre supplier Pirelli will be bringing its new Pirelli P Zero DHD2 tyre, which has already had two successful outings on this championship. Also on track this weekend will be the GT4 European Series – one of the fastest-growing categories in Europe – which Pirelli supplies with a bespoke P Zero DH tyre, with nine different manufacturers represented.

Located just south of London, Brands Hatch is a demanding circuit featuring high-speed corners with two course variants. The Blancpain GT Series Sprint Cup will run on the full 3.9-kilometre Grand Prix course – a former home of the British Grand Prix until 1986 – which features nine challenging corners, including the famous Paddock Hill Bend after the start-finish straight (one of the track’s key overtaking spots) together with Druid’s Hairpin. The lap record dates back to the 1986 F1 race: 1m09.593s.

ANY SURPRISES IN STORE?

British weather in springtime is notoriously fickle, so as well as the DHD2 slick tyre, there’s a strong chance of seeing the Cinturato WH wet tyre in action for the first time on the Blancpain GT Series this year. Whatever happens, the action will be close: Belgian Audi Club Team WRT will bring a third Pro car and leading British privateers Team Parker Racing are also fielding an extended line-up for their home event. After the Emil Frey team was one of the stars of Monza with their its Jaguar, the Swiss squad is looking to spring a similar surprise at Brands Hatch with the new Lexus RC F and its stellar driver line-up. 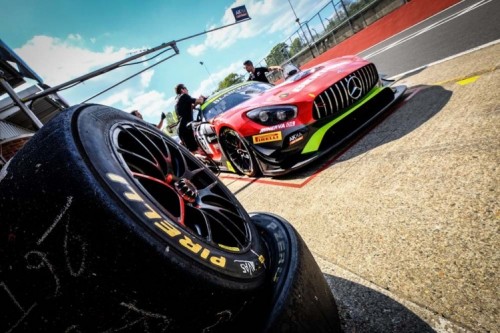 After Brands Hatch there are just three more rounds for the Sprint Cup, so there is everything to play for. GRT Grasser Racing Team’s Lamborghini won the Brands Hatch round last year, but following their strong showing in Monza, Audi and Mercedes will be hungry for more success. As usual, there will be two 60-minute races on Sunday (6 May) at 12:00 and 16:30, with qualifying on Saturday afternoon after free practice in the morning. Pirelli will be present with an eye-catching new activation area as seen at Monza, featuring product displays, advanced simulators and a pit stop challenge with virtual reality augmentation.

Matteo Braga, circuit technical manager: “Brands Hatch is a fast and flowing track that is well-known for providing a big technical challenge for drivers, cars and tyres: especially given the possibility of variable weather conditions. The track is quite narrow and doesn’t forgive any mistakes, so drivers need to be very precise with their racing lines. Especially with GT4, this is always a very popular and busy weekend: we will be bringing nearly 1500 tyres for all the categories racing over the weekend, not to mention about 40 people in different technical, management and activation roles. This underlines Pirelli’s strong commitment to GT racing across Europe in every category.”