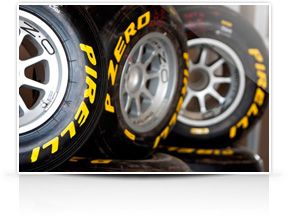 The final round of the 2011 GP2 Asia Series will take place at Imola in Italy from March 18 -20, with Pirelli as the sole tyre supplier to the championship. With Bahrain withdrawn from this year's calendar, the legendary Autodromo Internazionale Enzo e Dino Ferrari has been selected as the venue for the final round of the Series. The Italian track, which has helped to forge the history of Formula One, will once again become the centrepiece of single-seater racing, having hosted its last Formula One Grand Prix in 2006. Pirelli will take its medium slicks to Imola, which are well adapted to this highly technical track. The circuit has recently undergone extensive revisions to the pit lane and its final corners: the Variante Bassa chicane has been removed, making the run from Rivazza to the first Tamburello chicane totally flat-out, much like the circuit was originally. With its challenging turns, short straights and hard braking zones, this 4.909 kilometre-long track is very demanding on tyres - especially in terms of longitudinal loads and overheating. Pirelli's Racing Manager Mario Isola said: "We are delighted that Imola will host the final round of the GP2 Asia Series, because this circuit forms part of the history of single-seater racing and it has also played an important role in our own motorsport activities. Imola is a very interesting track that is highly technical and incredibly demanding, with several heavy braking zones and limited opportunities for the rubber to cool down. In these conditions we need to give drivers tyres that are very durable but do not in any way compromise safety and roadholding. This is why we decided to opt for our medium compound slicks, which cope well with the demands of the track as well as its unpredictable weather conditions. Our medium compound GP2 rubber has shown itself to have a very good balance between durability and artificial degradation. This was the case at Abu Dhabi earlier this year and I'm sure it will be the same at Imola." Before the final GP2 Asia round gets underway at Imola, celebrations for the 150th anniversary of Italy's unification will be held on 17 March. For this special occasion, the Autodromo Internazionale Enzo e Dino Ferrari will be open from 09:00 to 18:00, allowing visitors to observe the teams making preparations for the race weekend.