Pirelli is official supplier to FIA GT1 and GT3 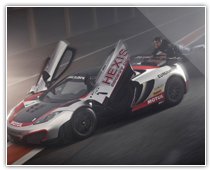 Pirelli is the official tyre supplier to the FIA GT1 World Championship and FIA GT3 European Championship for the 2012 season. “Pirelli have an unrivalled reputation in global motorsport and we are pleased that our teams in both GT1 and GT3 will benefit from the technical expertise and experience the company brings”, said Stephane Ratel, Founder and CEO of SRO Motorsports Group. “Their recent success in helping to create competitive racing in Formula One through their innovative approach underlines that point”. “We have a long and rich history in all categories of motorsport, particularly GT racing,” said Pirelli’s Motorsport Director Paul Hembery. “GT racing is an important segment for us as a number of our customers drive the vehicles which compete in the GT categories, particularly our premium customers so the relationship makes a lot of sense. Even though we are involved in Formula One, we have also had a major involvement in a number of other categories of motorsport for over 100 years”. The teams taking part in the FIA GT1 World Championship will be lining up 18 cars on the starting grid of 9 different makes: Ferrari, Audi, BMW, McLaren, Mercedes, Lamborghini, Porsche, Aston Martin and Ford. The FIA GT1 comprises 10 races to be run in several countries, whilst the FIA GT3 rounds will mainly coincide with the FIA GT1 European events The opening event will take place over Easter weekend at the Nogaro circuit in France.

Pirelli is official supplier to FIA GT1 and GT3
Newsroom