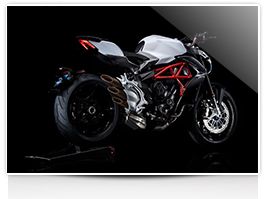 Pirelli is confirmed as a main protagonist at the Milanese show dedicated to the world of motorcycling. With its wide range of tyres designed for diverse motorcycles, the brand of the elongated P has been chosen as original equipment on the most important bikes introduced by some of the most prestigious motorcycle manufacturers such as MV Agusta, Ducati, Triumph and Moto Guzzi. Nine models of Pirelli tyres are selected to equip new bikes for 2016. From the hypersport DIABLO™ Supercorsa SP to the new supersport tyre; DIABLO ROSSO™ III, the DIABLO ROSSO™ II and the DIABLO ROSSO™ CORSA to the family of enduro street tyres; SCORPION™ Trail and its successor SCORPION ™ Trail II. Without forgetting some new but classic looking tyres of the Pirelli range such as the MT 60™ RS, PHANTOM™ Sportscomp and the SPORT DEMON™ chosen by motorcycle manufacturers and customizers to equip the modern cafe racers, mid-sized customs and modern classics. 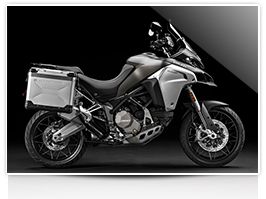 The new Brutale 800 is more muscular and streamlined, with new technologies and construction solutions, reinterprets the style which made it an icon of motorcycle design. There could be no better choice to equip this bike than the DIABLO ROSSO™ III, the new supersport tyre of the DIABLO™tyre family which takes the performance offered by a road tyre to a new level. The tyre is the direct successor of the DIABLO ROSSO™ II but raises the bar of sport riding even higher. It extends the qualities of its predecessor, strengthening its features in terms of handling and grip, with long lasting performance.

Designed and developed with a view to equip the latest generation of powerful road bikes characterised by significant technological equipment and electronic control systems, DIABLO ROSSO™ III is a tyre born from the racetrack for the road because it takes advantage of all the research and know-how acquired by Pirelli in the FIM Superbike World Championship, in the last twelve years of participation in its capacity as Official Tyre Supplier. In addition to the Monster 1200 R presented in mid-September and equipped with Pirelli DIABLO™ Supercorsa SP in 120/70 ZR 17 M/C (58W) TL front and 200/55 ZR 17 M/C (78W) TL rear, Ducati unveiled on Monday, November 16, during a press conference, seven new models that will be on the sale in 2016, all equipped with Pirelli tyres. The new Multistrada 1200 Enduro is Ducati's entry into the world of maxi-enduro. Born to travel and to be 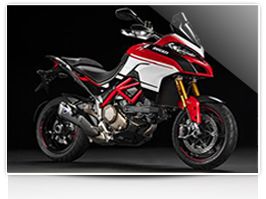 unstoppable on any terrain, the Multistrada 1200 Enduro is a full-optional bike designed to satisfy even the most demanding globetrotter. Moreover, this maxi-enduro has specifically been developed and built to handle the stress and strain of off-road riding. The model is equipped with Pirelli SCORPION™ Trail II in 120/70 ZR19 M/C 60W TL (D) front and 170/60 ZR17 M/C 72W TL (D) rear sizes where the letter D in brackets indicates a specification developed specifically for the new version of the Multistrada family. Designed for the most demanding motorcyclists, it features key points of excellence; high mileage, consistency of performance for it’s entire tyre life and top notch wet behaviour. The innovative tread pattern of SCORPION™ Trail II is the result of this famous Off road line, enriched with the experience gained by Pirelli with the development of ANGEL™ GT, considered the reference tyre in the Sport Touring segment. 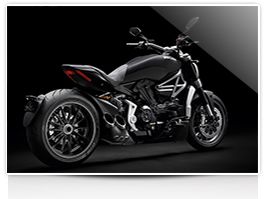 Ducati enters the Cruiser domain and does so in its own inimitable way, presenting a true Cruiser with all the design, technology and performance one expects from a Ducati thoroughbred. Called the XDiavel, it brings together two worlds: the Cruiser world - low speeds, relaxed riding, long journeys and feet forward ergonomics - and the Ducati world, characterised by Italian style, refined engineering and unparalleled performance. The XDiavel ensures the “low speed excitement” typical of a Cruiser and the adrenaline rush of sports riding that Ducati has made its own. The new XDiavel mounts 14-spoke wheels. At the front end the bike sports a 3.5” x 17’’ wheel, at the rear a 8” x 17’’ one. On the XDiavel S exclusive machine-finished 12-spoke wheels bring design even further to the fore. Both versions are equipped with original equipment tyres Pirelli DIABLO ROSSO™ II. The front wheel mounts a standard 120/70 ZR 17 M / C (58W) TL tyre, while the rear tyre is a 240/45 ZR 17 M / C (82W) TL which has been specially developed by Pirelli at the request of Ducati. 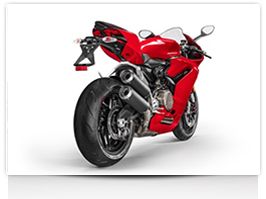 DIABLO ROSSO™ II helps make the motorcycle comfortable and suitable to a cruiser riding style. The rear tyre is made with EPT (Enhanced Contact Patch) technology matched to Pirelli’s patented 0° steel belt structure to offer maximum grip at full lean and long lasting performance on road. The compounds have undergone extensive testing with Ducati Traction Control for fast warm-up capabilities, high traction under straight line acceleration and confident grip at all lean angles to suit the many different riding styles of the XDiavel. 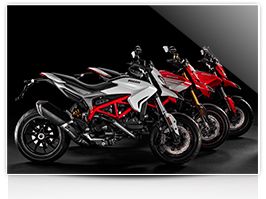 The Pirelli DIABLO ROSSO™ CORSA in 120/70 ZR 17 M/C (58W) TL front and 180/60 ZR 17 M/C (75W) TL rear are the tyres chosen for the new Ducati “Supermid” model which is to become a larger capacity, even more versatile. The Ducati 959 Panigale shares the same innovative stylistic features that characterize its 'bigger brother', the 1299 Panigale - but with an engine designed for a more enjoyable everyday riding experience and more thrills on the race track. The new 955 cm3 twin-cylinder power unit, the first Superquadro to have obtained Euro 4* type-approval, comes with a new stroke length and other innovations that have given rise to an even more impressive torque curve and increased maximum power. Obviously a bike with these characteristics could only mount high performing street use tyres. The Pirelli DIABLO ROSSO™ CORSA is a versatile hypersport tyre available for use on the road and track, designed for modern faired and naked sport bikes. They embody the three founding souls of the Pirelli sport range, combined in one product: DIABLO™, the prestigious brand which Pirelli has been providing since the beginning of the new millennium, undisputed in the bike racing and hypersport world, Rosso illustrating the all-Italian Pirelli passion for motor sport competition and Corsa; the most noble expression of power in race tyres with undisputed performance. 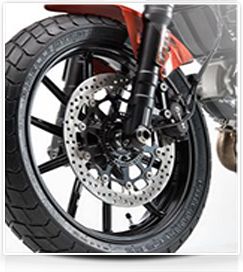 The Ducati Hypermotard range is renewed for 2016 with the arrival of the new EURO 4 certified 937 cm3 Ducati Testastretta 11° engine. This twin-cylinder is to be used for the whole range, from the sporty Hypermotard 939 to the extreme Hypermotard 939 SP as well as the Hyperstrada 939, the tourer that's particularly suited for everyday use. For the Hypermotard 939 Ducati has chosen as original equipment the DIABLO ROSSO ™ II in 120/70 ZR 17 M/C (58W) TL front and 180/55 ZR 17 M/C (73W) TL rear while for the most extreme version, the Hypermotard SP 939, the tyres selected are the DIABLO™ Supercorsa SP in the same sizes adopted by the standard model. Finally Hyperstrada 939, designed for the travels, is equipped with Pirelli SCORPION ™ Trail. The new Ducati Scrambler Sixty2 doesn't just extend the range on offer from the new Ducati brand, it opens the way for a new two-wheel segment.  It meets the requirements of those seeking an accessible bike that is easy to handle and has low running costs while  capturing the unique Scrambler spirit: fun and the sharing of positive emotion. As its older sister, the Scrambler Sixty 2 is equipped with Pirelli MT 60™ RS, in this case in 110/80 R 18 M/C 58H TL front and in the new 160/60 R 17 69V TL rear size developed specifically for this new model. Sixty2 is a Scrambler inspired by youth street culture, skateboards, street food, pop music and, above all, pop art that, back in 1962 (the year the very first Ducati Scrambler was launched), was taking the United States by storm. That's why the Sixty2, the most "popular" Scrambler ever, is already a "pop icon".

MT 60™ RS is a product present in the enduro street range of Pirelli tyres for many years and has always been a benchmark for the segment thanks to its ability to combine sports-road performance with traction on unpaved roads. 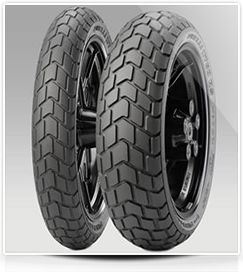 Already original equipment of the new Yamaha XSR700 in 120/70 R17 TL 58V front and 180/55 R17 58V TL 73V rear, the PHANTOM™ Sportscomp is currently one of Pirelli's most fashionable tyres. Also the British motorcycle manufacturer Triumph relies on Pirelli tyres to equip its new models. PHANTOM™ Sportscomp was chosen by the Hinckley based manufacturer as original equipment for the new Bonneville family. Specifically, to equip the new Twin Street, Bonneville T120 and T120 Bonneville Black, Pirelli has worked closely with Triumph engineers in identifying the new 100/90 - 18 M/C 65H TL front and 150/70 R17 M/C TL 69H rear sizes as the best ones to fit to the new line of Bonneville motorcycles. The timeless style and character of the legendary original Bonneville relive in the elegant and genuine Bonneville T120 and in the dark and moody T120 Black. Both are built with the highest standards of quality and attention to detail yet with all the capabilities and performance of a true modern classic. 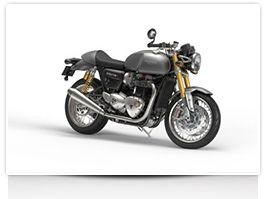 The new Triumph Street Twin is the newest modern Bonneville, fun and affordable. With its unique character, the exciting engine, the unmistakable soundtrack, the minimalist style and the dynamic riding experience, the Street Twin is the Bonneville for the bikers of today. Besides Street Twin, Bonneville T120 and T120 Bonneville Black with PHANTOM™ Sportscomp, another motorcycle from the Bonneville familyis equipped Pirelli: this is the new Thruxton R, the most exciting and authentic Triumph classic sport motorcycle of all time, which is shod with performance tyres such as the Pirelli DIABLO ROSSO™ CORSA in 120/70 ZR 17 M/C (58W) TL front and 160/60 ZR 17 M/C (69W) TL rear. Triumph does not rely on Pirelli only for the Bonneville family. The new Speed Triple S and Speed Triple R raise the standard of the original streetfighter to a new level in terms of performance, power, handling and capacity. The two models will be shod with original equipment Pirelli DIABLO™ Supercorsa SP tyres, the ultimate expression of performance typical of the sporty DNA of the Italian brand.

Lastly Pirelli SPORT DEMON™ is the tyre chosen by Moto Guzzi for the latest addition to the Italian motorcycle which this year celebrates ninety-five years of history. Already chosen to equip the model V7 II in the versions Stone, Special and Racer, the Mandello del Lario based company has also confirmed the SPORT DEMON™ tyres also for the new V9 Roamer. The Moto Guzzi V9 Roamer, equipped with 100/90-19 M/C 57V TL front and 150/80 V16 M/C (71V) TL rear tyres is a mid-sized custom, heir to a tradition of over forty years of custom, which has opened a new product segment and displacement in the range of the manufacturer. The V9 Roamer takes up the baton left by the legendary Nevada, which remained in range over twenty years and appreciated for its ease by audiences of all ages, both male and female. SPORT DEMON™ is a tyre with conventional construction perfect for motorcycles destined for touring as it offers a uniform and progressive performance in all riding conditions, thanks to the rear multi-radius profilein addition to a high grip on wet and dry surfaces, all combined with excellent mileage.