Pirelli launches incentives for changing tyres:
Fuel contribution of up to 60 euros
for those who substitute old tyres with "green" products

This measure, an innovative one for the tyre industry, aims to sustain demand at a difficult time for the economy and stimulate the use of low environmental impact products for each segment of the automobile market, promoting substitution of tyres that are worn out beyond legal limits (equal to 1.6 millimeters of residual tread), in order to favor road safety.

The incentive for substitution of worn tyres is part of Pirelli's program to develop solutions and products that are more and more innovative and ecological, as announced in the 2009-2011 industrial plan presented by the Group last February. 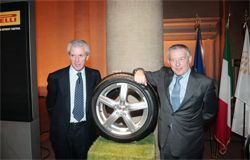 The initiative was presented today in Rome by Pirelli Chairman Marco Tronchetti Provera and Pirelli Tyre CEO Francesco Gori, at an event attended by Altero Matteoli, Minister for Infrastructure and Transportation, Adolfo Urso, Undersecretary for Economic Development and International Trade, Mario Valducci, Chairman of the Transportation, Post and Telecommunications Commission of the Chamber of Deputies, and Andrea Mondello, Chairman of Unioncamere.

During the event, held at the Temple of Hadrian, the characteristics of the Cinturato P7, the first high performance ecological tyre for the high end of the market, were illustrated. The P7 completes the Cinturato family of "green" products, launched last year with the P4 and P6 models for mid-range automobiles.

The program of incentives for substitution of tyres, promoted by Pirelli, the details of which will be published on the Company's website, include, in collaboration with ENI and for You&Agip program members, a contribution for purchase of fuel of up to 60 euros, depending on the type of Cinturato tyre is purchased between the end of May and the end of July.

The Cinturato P7, which will be available starting in May, and has already been adopted by the major automobile manufacturers, is the latest product, in chronological terms, developed by Pirelli's R&D department in line with new European norms that will come into force in 2012.

From an ecological point of view, the Cinturato P7, beyond ensuring lower CO2 emissions up to 4 grams per kilometer driven, with a consequent lower fuel consumption, can reduce sound emissions by 30%. From a safety point of view, it ensures excellent performance both on dry and wet road surfaces.

Tyres contribute on average to 20% of overall consumption and CO2 emissions of a vehicle. Pirelli Labs are committed to research in order to drastically reduce this impact, adopting "green" technology solutions, from mixes to tyre structure, without lowering the safety parameters of the vehicle especially when braking or on curves.

In particular, for mixes, Pirelli is committed to developing and putting into use a series of new materials that are more and more ecological. Already this year, the Italian group will be able to use rice husk among its components for tyre production. The use of this natural product will allow for limiting the use of synthetic substances, thus lowering pollution. Rice husk is discarded from the process of preparing rice and is not for food use.

Pirelli technicians are also developing the Cyber Tyre, the "intelligent" tyre, which "reads" the pavement conditions thanks to an integrated chip, transmitting to the vehicle information in real time that can be used to find the best driving set up, and to signal situations that are critical for safety. The Cyber Tyre, by keeping under control health and pressure of the tyre, will also contribute to reducing fuel consumption and the environmental impact.

The new Cinturato P7 goes in this direction, bringing together ecology and performance, ensuring at the same time energy savings and reduction of toxic emissions, driving pleasure and safety, including on medium and high powered cars.