Pirelli leads MXGP and MX2 with Desalle and Herlings 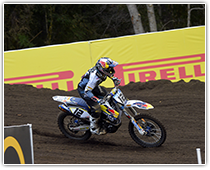 Pirelli’s SCORPION™ MX32™ support again this year many of the riders participating to the FIM Motocross World Championship.  The Italian tyre company is, in fact, one of the Official Supplier for the championship promoted by Youthstream and it can boast a record of 62 world titles, obtained with standard products on sale on the market. The first round of the 2015 FIM Motocross World Championship took place by night on the International Circuit of Losail, Qatar, for the third year in a row.  The SCORPION™ MX32™ 80/100-21 front and SCORPION™ MX32™ 110/90-19 rear tyres enhanced the quality of the Pirelli champions on show, such as Tony Cairoli, fighting this year for his ninth title, or the young talent Jeffrey Herlings, already a two-time winner; Jordi Tixier, reigning MX2 champion; David Philippaerts, titled in 2008 and returning this year to Pirelli; Max Nagl who climbed to the top step of the podium, scoring both ‘holeshots’ with Pirelli and winning the two races; and Clement Desalle, steering his Suzuki with aplomb. The race then moved to the new location of Nakhonchaisri, a tortuous track characterized by supercross-style obstacles, where Pirelli riders continued to yield results in all classes thanks to the excellent performance of the SCORPION™ MX 32™, 80/100-21front and 110/90 rear. 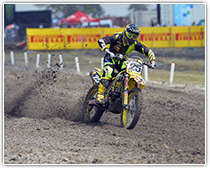 The SCORPION™ MX swept podium also in both classes of the 2015 Argentina Grand Prix, held in Villa La Angostura, Patagonia.  Pirelli leads the MXGP ranking with Desalle, who finished second on SCORPION™ Soft 410 120/80-19 rear, and the MX2 class with Herlings, who was forced to retire in the first moto due to a crash but thanks to the victory in the second moto keeps the Red Plate in the championship. After the first three rounds outside Europe, the Motocross World Championship will return to the old continent for the Grand Prix of Trentino on circuit of Arco di Trento on April 19th.

Pirelli leads MXGP and MX2 with Desalle and Herlings