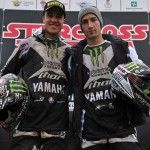 In the same weekend as Pirelli SCORPION MX triumphed at the Valence International MX with Suzuki rider Clement Desalle, in Italy the Monster Energy Yamaha rider David Philippaerts opened the MX season at the 2011 Starcross of Mantua by taking first in the MX1 class, joined in victory by his teammate Gautier Paulin who managed to win all the three races in the MX2 class. 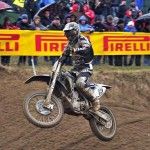 Also on the MX1 podium were Tanel Leok and Anthony Boissiere, the latter a new addition to the Yamaha Gariboldi MX1 team, with fourth place going to Kevin Strijbos who had a technical problem in the second race who lost seven places from second to ninth place and any opportunity to be on the podiu. Strijbos found some success in the final race MX1 when he battled hard with Philippaerts. MX2 podium was completed by KTM Silver Actions’ Antonio Butron in second place and Boissiere’s MX2 teammate Harri Kullas in third. Upon the impervious sands of the Mantua Starcross 2010, those bearing Pirelli Scorpion tyres were able to rely on the fantastic performances of grip and line-holding of the MX MidSoft 32 front and MX Soft 410 rear, developed and implemented specifically for this soft and wet terrain for the most optimal results.