Pirelli on top with Soft Compound in Hungary

Round six of the inaugural GP3 series, which is supplied exclusively by Pirelli, took competitors to the famous Hungaroring, located close to the Hungarian capital of Budapest. As always the two GP3 races formed an integral part of the Grand Prix support programme, enabling the stars of the future to showcase their talents in front of the most influential people in motorsport. 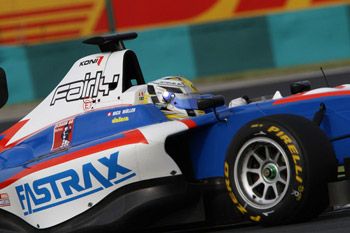 Adding to the fascinating mix of eight circuits that the GP3 series visits, the Hungaroring has a very specific layout, with a medium-abrasive surface. It is a technical circuit that tests drivers and cars to the limit, with hot weather at the height of summer adding to the challenge. Pirelli opted to use the soft-compound PZero 13-inch tyre for the two races in Hungary, which was first seen at the European Grand Prix in Valencia at the end of June. While the conditions in Hungary were as expected very demanding, the soft tyre proved that it was more than capable of handling the unique demands and high temperatures of the twisty Hungaroring circuit. Pirelli's Max Damiani said: "Given the nature of the circuit and the high ambient temperatures, our soft-compound tyres faced a tough task. Naturally we kept a close eye on wear rates, but the tyres proved to be more than up to the task, providing a perfect compromise between performance and durability throughout both races. We experienced no problems all weekend, and once more enjoyed two closely-matched races that underline GP3's role as a crucial feeder series towards the prestigious GP2 championship." On Saturday, Swiss driver Nico Muller won the feature race from pole. Series leader Esteban Gutierrez was second to reinforce his notable advantage, while Stefano Coletti was third. Sunday's race was characterised by frenetic action and close competition. Alexander Rossi took his second win of the season, while second place for Robert Wickens was enough to prevent Gutierrez from wrapping up to the title with two rounds still left to go. Dean Smith finished third, while ART Grand Prix continues to lead the teams' standings after Hungary. The next two races of the eight-round GP3 series take place at the Belgian Grand Prix in Spa-Francorchamps from August 28-29. Pirelli was recently confirmed as the exclusive tyre supplier to Formula One next year, along with GP2 and GP3. In this way, future generations of drivers will benefit from a Pirelli-backed ladder of talent designed to take them all the way to the very top of the sport. For GP3 series information: www.gp3series.com
Newsroom

Pirelli on top with Soft Compound in Hungary