As Phillip Island kicks off the production based Championship- which this year includes some new features which Pirelli actively contribute; such as the Superbike EVO and new qualifying format 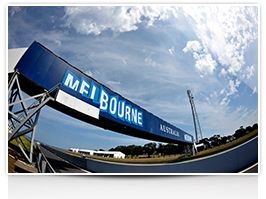 Pirelli returns to Australia for the first round of the eni FIM Superbike World Championship that will take place at PhillipIsland, a small island 150 kms south of Melbourne. A little over a year ago, in December 2012, the track underwent an extensive "facelift" which involved the first resurfacing of the track in 14 years and although Pirelli has already tasted the new asphalt last year without particular difficulties, this will still be a factor to be reckoned with . The first event for the riders, however, is that of the official tests at the beginning of the season on the Monday and Tuesday before the races on Sunday 23 February. Two of the most important innovations for the season at hand: the introduction of the subclass Superbike EVO in the premier class of the Championship and the new format of the free practices timed for qualifying and Superpole. As previously announced, during the season Pirelli will offer support to maintain the competitiveness of the Championship by providing in some races with a differentiated supply of tyres between Superbike and Superbike EVO . Phillip Island VS tyres: the challenging “Southern Loop” A peculiarity of the PhilipIsland track is the famous “Southern Loop”, the longest corner on any circuit in the eni FIM World Superbike Championship. Besides being the longest, this turn also has a medium-side radius which allows the riders to navigate it at full throttle, with a fixed lean angle for a sustained period of time. The tyre is forced to work for a long time with mechanical stress focused on a small strip of tread in precisely the area of continuous use. This causes a rapid rise in local temperature which causes a loss of grip on the asphalt which in turn, (due to the friction of the tyre against the road surface) causes a further increase in temperature due to friction and a large amount of tyre material is removed. Therefore there is an exponential and uncontrolled rise in temperature capable of generating a thermal breakdown of the compound (commonly known as blistering). So the particular characteristic of the PhillipIsland track is that it simultaneously generates mechanical and thermal stress to which the tyres are constantly subjected. The track also has various fast turns which have an intense impact on the front tyre due to the new surface. Pirelli’s solutions for Superbike and Supersport classes: Given the characteristics of the circuit, for the first round of the Championship Pirelli brings for both the Superbike and the Supersport classes some range solutions which are flanked by development solutions designed specifically for Australia. A total of 5626 tyres have been brought by Pirelli for the two classes for tests and the race weekend. Both in Superbike and Supersport the goal of the test is to compare rear solutions with two different profiles. That's why for today and tomorrow’s tests, the Superbike class will have two rear medium-soft development solutions, the S1633 and the S1635, which are distinguished by having two different profiles. The S1633 is based on the reference solution from Phillip Island 2013, designed with different inner structure and materials to maintain the operating temperature when particularly cold, the S1635 has a rather different profile designed to distribute the stresses and pressures and thus offer an improved footprint. At the front slicks chosen by Pirelli to test include two SC2, the standard one and the R753 already brought last year at PhillipIsland, Monza, Portimão, Imola, Moscow and Istanbul. As for the Supersport class, at the rear Pirelli bring the standard SC1, alongside the S1660, a medium-soft development solution adopting the profile used in 2013 races in Istanbul and Jerez de la Frontera. Standard SC1 and SC2 for the front. Based on the results of the test, teams will then be in a position during the race weekend to guide their choices on different solutions that among them are distinguished by the hardness of the compound while adopting one of the two profiles seen in testing. 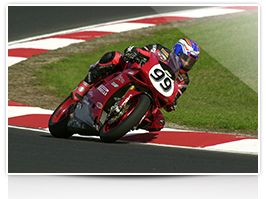 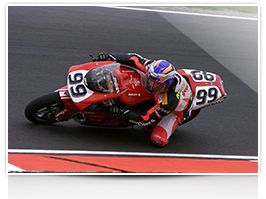 Giorgio Barbier’s memory: the year was...2001 "It was 2001, the year in which Pirelli returned to compete in the World Superbike Championship after an absence of 9 years" said Giorgio Barbier, Pirelli Moto Racing Director "Before the season, the first step was to look for a good rider for our return, at the suggestion of the Ducati choice fell on the young Steve Martin, a very promising Australian rider winner of the Australian Superbike Championship in 1999. That year the Championship started in March in Valencia, before heading to South Africa at the end of the month and in Australia, at Phillip Island, where he rode in the round held on Sunday April 22. The weather was bad, I remember perfectly well that the tunnel leading to the paddock was completely flooded and to go out of the circuit it was necessary to open the gates at the bottom of the straight passing with trucks on a completely sodden grass, with all the difficulties that this entailed. For this same reason that day only Race 1 was raced, as Race 2 was cancelled due to the abundant rain. Steve Martin, who ran with the number 99 on the Ducati 996 RS of the DFX Racing team, started from 12th place on the grid. It was an exciting competition raced in the rain: during the first lap Steve was already in fourth position for the first two laps and looked like he could reach the top 3 riders. Lap after lap he began to lose ground due to a malfunction of the Ducati which began to run on one cylinder and Steve finished the race in the same position from which he started. The result was not a just reward for him but for a few laps he allowed us a beautiful dream in this first year of our return to this production based series. Now every weekend Steve introduces us to the excitement of Superbike from his commentary booth! " The 2013 Pirelli statistics for Phillip Island: • Total number of tyres Pirelli brought: 3580 • Number of solutions (dry, intermediate and wet) for the Superbike class: 6 front and 7 rear • Number of solutions for the Supersport class (dry, intermediate and wet): 4 front and 6 rear • Number of tyres available for each Superbike rider: 36 front and 38 rear • Number of tyres available for each Supersport rider: 24 front and 33 rear • Superbike Best Lap Awards won by: Michel Fabrizio (Red Devils Roma), 1'31.323 (Race 1, 7th lap) and Eugene Laverty (Aprilia Racing Team), 1'31.168 (Race 2, 20th lap) • Supersport Best Lap Awards won by: Kenan Sofuoglu (MAHI Racing Team India), 1'33.283 (15th lap) • Temperature in Race 1: air 27° C, asphalt 47° C • Temperature in Race 2: air 26° C, asphalt 48° C • Maximum race speed reached by Pirelli tyres: 320,5 km/h, Michel Fabrizio in Race 1, 3rd lap