Pirelli’s P Zero tyres were subjected to sun, sea and plenty of sand when the FIA GT Championship resumed at the Dutch coastal circuit of Zandvoort last weekend. Amid ambient temperatures of 26 degrees centigrade and track temperatures of 34 degrees centigrade, the DHA slick Pirelli tyres performed faultlessly and maintained a strong level of performance on the abrasive surface for the two long-distance races. Zandvoort is located a few hundred metres from the North Sea and is susceptible to sand being blown onto the track, which can affect grip. This problem is accentuated by the narrow confines and unsighted corners resulting in more incidents than at other venues and leading to more sand and other debris falling onto the racing line. Laurens Vanthoor and Stephane Ortelli won Saturday’s Qualifying Race in their Belgium Audi Club Team WRT Audi R8 LMS ultra with Alon Day and Maximilian Buhk triumphing in Sunday’s Main Race in their HTP Gravity Charouz Mercedes SLS AMG GT3. 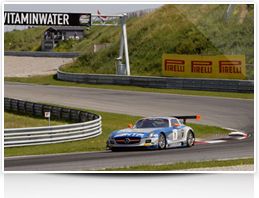 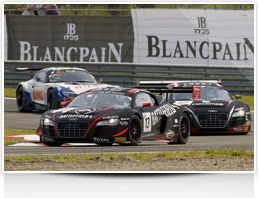 Sebastien Loeb Racing’s Alvaro Parente had started the Qualifying Race from pole position but retired after he was involved in a three-car collision at the first corner in his McLaren MP4-12C. Team-mate Loeb, who claimed three of his nine World Rally Championship titles on Pirelli tyres, started the Main Race from the back of the grid and overtook several cars before handing over to Parente at the mandatory pit stop. Parente was at the wheel when a late mechanical failure forced his retirement from the second race in succession. “Everything went very well from a tyre point of view,” said senior Pirelli engineer Matteo Braga. “We had high ambient and track temperatures and the surface is quite old and also quite abrasive, which made this a tough test for the tyres. But the drivers were able to push to the limit with no problems, which underlines the durability and high level of performance of the P Zero tyre in a wide variety of machinery. “We experienced a very low grip from the track in free practice because of all the sand that had been blown onto the circuit. While the surface got cleaner as more and more running that took place, there was never an optimal level of grip. However, we were treated to two exciting races and, of course, another successful event for the Pirelli P Zero tyre.” Pirelli is the official tyre supplier to the FIA GT Championship under a three-year agreement. Makes such as Audi, BMW, Ferrari, Lamborghini, Mercedes-Benz and McLaren, all of which use Pirelli P Zero tyres as original equipment on their road cars, compete in the series. For Zandvoort, Pirelli provided 1300 tyres in DHA (slick) and WH (wet) configuration and benefited from the services of 12 support personnel. All tyres are supplied in 18 inches with a consignment of 19-inch rear tyres available to meet the Ferrari’s design requirements. The FIA GT Championship resumes with round four in Slovakia from 17-18 August. ENDS For more information about Pirelli, please contact Anthony Peacock on +44 (0)7765 896 930 or anthony@mediaticaworld.com