Pirelli PHANTOM™ Sportscomp: from 1977 to today, mounted on the new Triumph Bonneville family

Tyres of Pirelli's PHANTOM™ line are legendary. They were produced for the first time back in 1977 and redesigned over the years to keep pace with the most modern technologies. Triumph has selected them for Street Twin, Bonneville T120 and Bonneville T120 Black in the new sizes 100/90 – 18 M/C 65H TL front and 150/70 R 17 M/C 69H TL rear 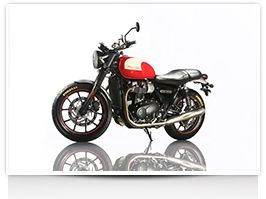 The historic partnership between Pirelli and Triumph is renewed with the new Triumph Bonneville range fitted with original equipment tyres PHANTOM™ Sportscomp. To celebrate the collaboration of two historical international motorcycling brands and especially to honour two models; PHANTOM™ and Bonneville which have made history in the world of two wheels, Pirelli and Triumph have created a special based on the new Street Twin. The Triumph Street Twin by Pirelli presents the livery used by the Bonneville in 1977, the year of birth of the Pirelli PHANTOM™ Sportscomp, with some elements of customization as the legendary Pirelli graphic logo "Scudetto and Stella" on the front fender and the tread pattern of the PHANTOM ™ Sportscomp on the tank. The Special made by Pirelli and Triumph will be on show from January 22 to 24 at MotorBikeExpo at VeronaFiere in Viale del Lavoro, 8 in Verona at Triumph booth: Hall 4 Stand R14 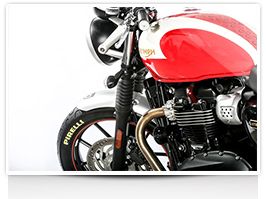 PHANTOM™ Sportscomp was selected by the Hinckley based manufacturer as original equipment for the new Bonneville family. Specifically, to equip the new Twin Street, Bonneville T120 and T120 Bonneville Black, Pirelli has worked closely with Triumph engineers in identifying the new 100/90 - 18 M/C 65H TL front and 150/70 R17 M/C TL 69H rear sizes as ‘best fit’ for the new line of Bonneville motorcycles. The timeless style and character of the legendary original Bonneville is relived in the elegant and genuine Bonneville T120 and in the dark and moody T120 Black. Both are built with the highest standards of quality and attention to detail, yet with all the capabilities and performance of a true modern classic. The new Triumph Street Twin is the newest modern Bonneville, fun and affordable. With its unique character, exciting engine, unmistakable soundtrack, minimalist style and dynamic riding experience, the Street Twin is the Bonneville for the bikers of today. 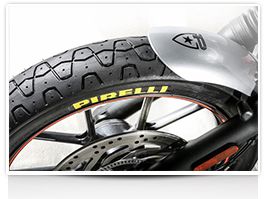 All this thanks to the excellent features offered by the PHANTOM™ Sportscomp that, as with the machines of the new Bonneville family, is a perfect mix of vintage and contemporary technology. There are few tyres in the international motorcycling world that can boast almost forty years of history and successes. The PHANTOM™ is without a doubt one of these and its constant presence and evolution over the years make it one of the most important brands among motorcycle products made by the "long P" company. At the end of 1977 Pirelli designed and presented to bikers all over the world a range of supersport tyres with the PHANTOM™ brand that were distinguished precisely by their high performance with high mileage guaranteed. They were revolutionary tyres for the time, which immediately were favoured and appreciated by motorcyclists to the point that they were used, in 1978, also in the Formula Laverda 500 Trophy, an Italian single-tyre championship sponsored by the FMI that was raced up to 1981. In the meantime the popularity of PHANTOM™ grew and from the Old World travelled all the way to Australia where, in the early ’80s, took part several times in the Castrol Six Hourrace, a motorcycling competition for production bikes organised by the Willoughby District Motorcycle Club, held at the Amaroo Park in Annangrove, New South Wales, not far from Sydney.

Thanks to the quality shown in races and to the recognition of the international market, it soon came into use also as original equipment. Motorcycle manufacturers realised that this product could substantially improve the rideability of their motorcycles. 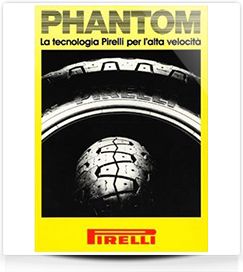 Pirelli thus understood that PHANTOM™ had become a benchmark product and that the market expected a wider range and constant updating. In 1984 PHANTOM™ + 1, PHANTOM™ Supertouring and PHANTOM™ Sportscomp were created. During the whole of the ’80s the PHANTOM™ line performed the role of flagship of the Pirelli production in all road bike applications, running from the Supertouring segment, through Supersport right up to Sportscomp. This last product was a radical innovation in the history of Pirelli motorcycle tyres, taking the maximum speed limit from 230 to 240 Km/h and enabling performance of a really higher level for the technology in use at the time. With the new millennium, in 2005, Pirelli revised the PHANTOM™ Sportscomp radically, combining the sporting origin of the Sportscomp with timeless charm and style, thus giving rise to a Sport Classic line within the Supersport segment. 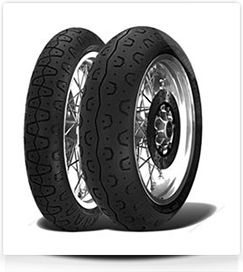 The PHANTOM™ Sportscomp, as it is known and marketed these days, makes use of the technologies of the new millennium and the latest developments in the design and creation of tyres. Now the PHANTOM™ Sportscomp is part of a line of historical tyres of the Pirelli Sport Classic range, which includes also the MT 60™ RS and SPORT DEMON™, destined to respond to the heritage trends and chosen by motorcycle manufacturers and customisers to equip modern café racers, medium-powered custom bikes and modern classics. All this due to the characteristics of excellence offered by the PHANTOM™ Sportscomp which, like the bikes of the new Bonneville family, is a perfect mix of vintage looks and contemporary technology. Among the strengths of this tyre include the easy handling and change in direction, stable and predictable behaviour under acceleration and braking, the high capacity of power transmission to the ground and the regular wear combined, to excellent mileage. 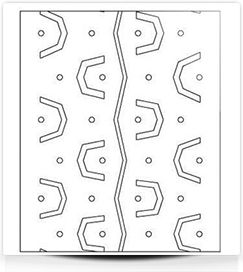 In addition to the 100/90- 18 front and 150/70 R17 rear as original equipment of the Triumph Bonneville family,the Sportscomp range is available also in 120/70 R17 TL 58V front and 180/55 R17 TL 73V rear plus in the same sizes but with a (W) speed index that allows its use for customization in the classic/vintage style of all sport and naked bikes requiring a speed index in brackets. In line with the Sport Classic philosophy, PHANTOM™ Sportscomp combines the historical tread pattern design of the PHANTOM™ line with the modern technology of the latest high performance tyres. At a structural level PHANTOM™ Sportscomp uses a steel belt at zero degrees of inclination with respect to the running direction of the tyre. Such a structural element, associated with one or more radial carcass plies of light and durable rayon, guarantees handling and grip even at high speeds. The result is high stability, uniformity in terms of contact area, and being able to optimize the contact patch at the different lean angles on the road. 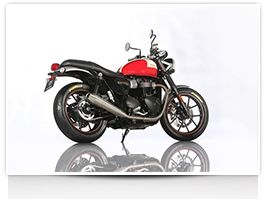 To better suit the modern needs of road riding, Pirelli has adopted development philosophies which aim to obtain a more “rounded” profile for both front and rear tyres, compared to the more “flat” one of the previous generation tyres. Moreover, thanks to the combined design of the front and rear tyre profiles, PHANTOM™ Sportscomp helps corner approach, holding a line, potential for greater acceleration on corner exit and improved precision. As regards the tread pattern, the PHANTOM™ Sportscomp presents a wavy longitudinal groove on both front and rear tyres which promotes fast water drainage, providing confident grip in wet conditions. The tyre has a sportier image with the characteristic “semi-slick” design. Finally, the compounds used have a high silica percentage which ensures grip in the wet and especially fast warm up, with a confidence inspiring grip factor on cold or wet tarmac.

Pirelli PHANTOM™ Sportscomp: from 1977 to today, mounted on the new Triumph Bonneville family