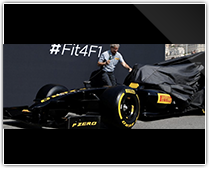 Pirelli has presented its new tyres for 2017. As part of dramatic rule changes for next season, aimed at cutting lap times, tyres will be 25%  wider than the current specification. This is a significant technical change that also has an effect on the balance and aesthetics of the cars that will compete next year: the initial season of Pirelli’s latest three-year agreement in FORMULA 1. Pirelli in fact will remain as exclusive tyre supplier to the FIA FORMULA ONE WORLD CHAMPIONSHIP for a further three years, once this season is completed. The Italian tyre manufacturer and the FIA have renewed their current contract, which will now extend from 2017 to 2019. New technical rules include a significant increase in aerodynamic downforce. To fulfil the objectives of improving lap times, in combination with the latest aerodynamic modifications, the decision has been taken to have wider tyres and therefore a wider track. Formula 1 would like to achieve a reduction in lap times of around four seconds per lap as a result of these new regulations. A part of this reduction will come from better performance from the tyres during corners and under acceleration. The front tyre, which is currently 245mm wide, will increase to 305mm. The rear tyre will grow from 325mm to 405mm. So the new sizes for slick tyres will be 305/670-13 at the front and 405/670-13 at the rear (the total diameter will go from the current 660mm to 670mm). The wheel rim diameter remains unchanged at 13 inches. 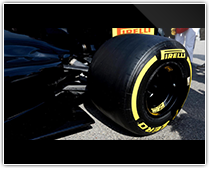 The new tyres are more than 60mm wider at the front and more than 80mm wider at the back. Consequently, the 2017 tyre increases in width by 25% compared to the current size. This is the case for all three types: slicks, intermediates and full wet. The contact patch (the area of tyre in contact with the ground, assuming equal tyre pressures) will be optimised not just in terms of size, but also shape. A total of 25 days of testing with tyres in the 2017 sizes, using cars modified to accommodate them, will start in early August, according to a programme that has been agreed with the participating teams. www.pirelli.com/global/en-ww/2017-bigger-and-better