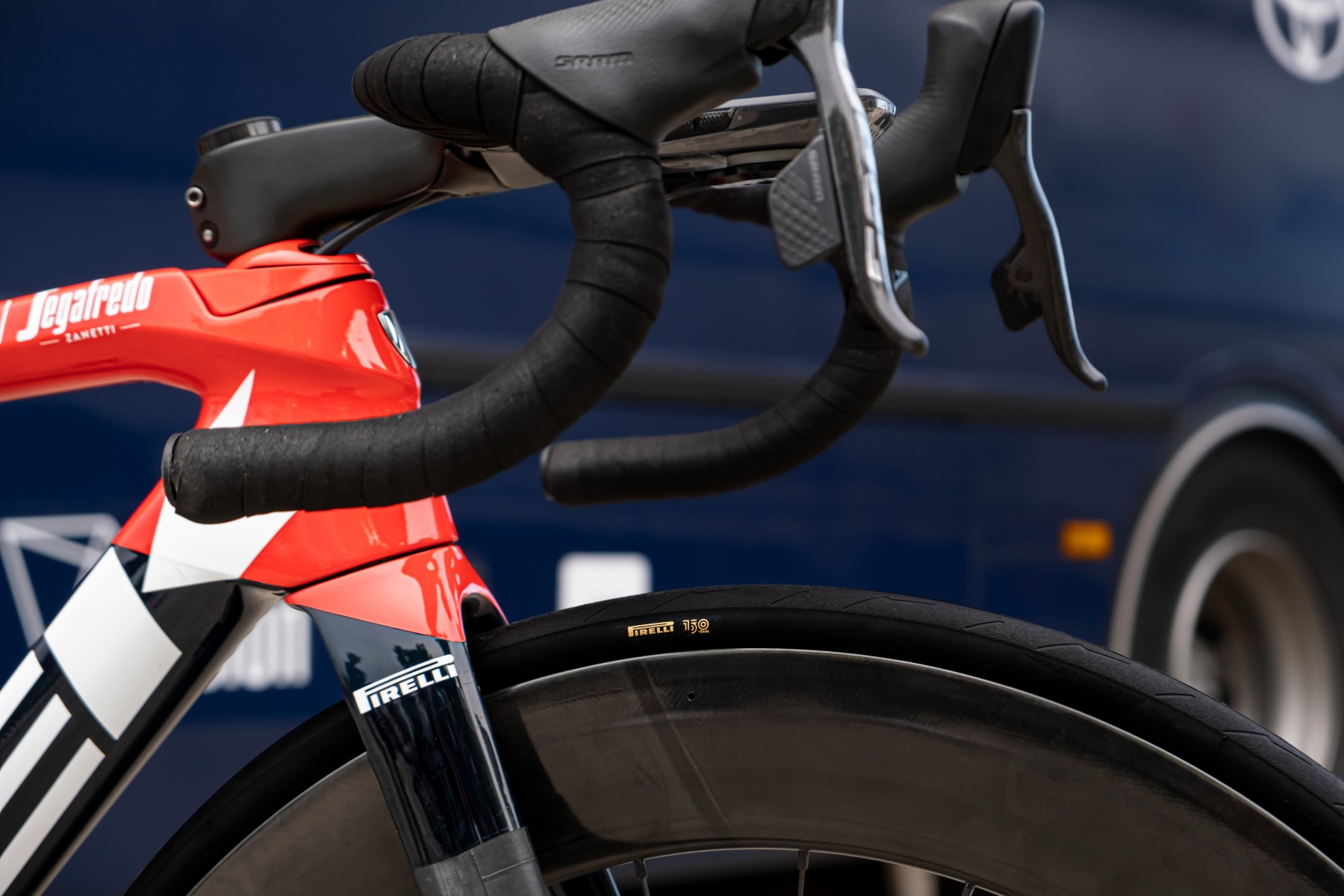 With the end of the Giro d'Italia P ZERO Race 150° hits the market. It is made in Italy and its special gold livery celebrates Pirelli's 150 years of history.

Milan (Italy), May 30, 2022 - Pirelli launches P ZERO Race 150°, a special version of its racing tyre that is dedicated to the 150th anniversary of the company, which began its tyre production with a bicycle one. The celebratory tyre debuted on Trek-Segafredo World Tour team bikes during the just-concluded Giro d'Italia.

P ZERO Race 150° is an all-round clincher suitable for both long training sessions and competition. It offers light weight, great smoothness, and grip also thanks to the special SmartEVO compound. Formulated with a ternary blend of polymers with "smart" behaviour characteristics, the compound allows excellent dry and wet grip and very low rolling resistance. The tyre’s 120 TPI nylon casing is protected by TechBELT Road technology, which improves puncture resistance without making the tyre heavier.

The P ZERO Race 150° is made in Italy: it is produced at the renovated Pirelli plant in Bollate, near Milan. It offers all the appreciated features of the original P ZERO Race tyre, a best-seller from the Milanese company, adorned with an exclusive gold livery, the “P Lunga 150°” logotype and dedicated packaging, and is available in sizes 26-622 and 28-622.

There are more than 110 years of Pirelli's successes and sporting history, but the one with the bicycle is the company's oldest link with sport, as evidenced by the rich archive of historical materials, sketches, photographs and audio-visuals preserved and enhanced by the Pirelli Foundation, that document this long business history.

"Pirelli & C." was founded in Milan, Italy, in 1872, by engineer Giovanni Battista Pirelli, to produce technical rubber items: rubberized canvas, transmission belts, fittings and sleeves. In 1890 Pirelli decided to put this expertise to use to develop a new product: its first bicycle tyre. It is, in fact, the first tyre produced by the company, which would later enter the motorcycle field and then the car business.

In 1895 the "Milano-Cremona-Brescia-Milano" race was held, and a new Pirelli racing bicycle tyre, the "Tipo Milano," was advertised for the occasion.

At that time tyres were, even more than today, a crucial element in bicycle races, the decisive technical component. Races took place on a wide variety of mostly uneven and bumpy road surfaces. The tyres and their respective inner tubes became valuable allies and companions of the cyclists, who wrapped them around their bodies carefully and maintained them with great care.

As early as 1899, a Pirelli catalogue shows a wide selection of tyre tubes, travel and racing bicycle tyres, as well as bicycle accessories such as handlebars, pedals, and brakes.

However, Pirelli's name is inextricably linked to cycling history during the first Giro d'Italia in 1909 where Pirelli also had a commemorative postcard printed for the occasion, featuring "I Pneumatici Pirelli” (the Pirelli tyres). During that first Giro, thirty of the forty-nine cyclists reaching the finish line mounted Pirelli tyres.

From that moment on, Pirelli tyres became the choice of all-time cycling Greats such as Ottavio Bottecchia, Alfredo Binda, Learco Guerra, Gino Bartali and Fausto Coppi, to name a few.

In 1932, on Bianchi bikes, Alfredo Bovet won the XXV Milano-Sanremo and the then general manager Edoardo Bianchi sent a letter to the Società Italiana Pirelli, congratulating it on the performance of Pirelli tubulars.

In 1949 the first Pirelli Grand Prix was held, an amateur race that offered the highest prize money at the time. Created by Arturo Pozzo together with Alfredo Binda, this prestigious annual race for amateurs allowed many talented athletes to be discovered and then become professional cyclists.

Over the years the range expanded and became more specialized with models responding to various uses. In 1992 the last production of Pirelli-branded bicycle tyres came out on the market. In 2017 the company re-entered the cycling field with the launch of the now famous P ZERO.

Today as then, the logo with the characteristic "elongated P" is back on the bikes of the greatest cyclists of the day. It was the emblem of men, teams, and feats that made the history of Italy's second most popular sport after soccer: Ottavio Bottecchia, the first ace of the 1920s, Alfredo Binda, Learco Guerra, the Legnano team, Gino Bartali and Fausto Coppi, the Bianchi team, the first world championships, the Giro and Tour de France, the road and track Classics. Today it is the choice of such World Tour cycling teams as Trek-Segafredo, UAE Team Emirates and AG2R Citröen, as well as the factory MTB team Wilier Triestina-Pirelli and the DH team Canyon CLLCTV Pirelli.

In 2022, Pirelli officially announced the resumption of bike tyre production in Italy thanks to the revamped Bollate plant, where the highest performance models in the range are made, including the celebratory P ZERO Race 150° tyre.