Pirelli protagonists in the opening round of the Internationals of Italy

Cairoli won the MX1 and the Elite classes, Tonus the MX2 and Isdraele the 125 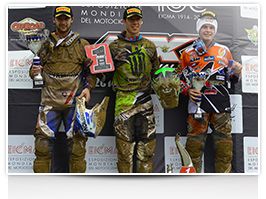 The season of motocross international immediately brought to the fore the Pirelli SCORPION™ MX tyres that yesterday dominated all four classes racing in the first of three rounds of the Internazionali d’Italia championship. On the tough and demanding sand of the Sardinian circuit, Pirelli SCORPION™ MX MidSoft 32F front and SCORPION™ MX Soft 410 rear relied on their superior traction and directional climbing on the highest step of the podium in every race heats. The MX1 and the Elite classes, the latter enclosing the top 20 riders in the 250 and 450, have been a private affair of Antonio Cairoli who won with absolute authority in his KTM factory; Pirelli podium in both classes it’s been completed by the Belgian Jeremy Van Horebeek, Yamaha's new signing, who secured in the first heat a 3rd and in the second a 2nd place. Good performance also for the former World Champion David Philippaerts (4th and 7th) on the Yamaha privateer, and Tyla Rattray (5th and 4th) to debut with the factory Husqvarna. Absent instead Ken De Dycker because the recent fracture of a wrist. In the MX2 class surprising victory of the Swiss Kawasaki Arnaud Tonus, who reiterated his superiority finishing 1st of 250 riders (and 6th overall) in the Elite moto. Behind him the other Pirelli riders Christophe Charlier, who retired in the final test for a problem with a knee, Paul Jonass and Jordi Tixier; unlucky Alex Lupino remained below its potential for a fall at the first start that has affected the rest of day. 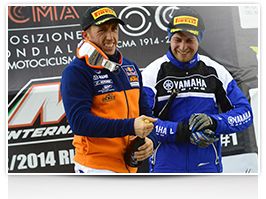 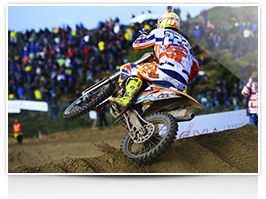 Good race for the young Tommaso Isdraele and Samuele Bernardini, the respective protagonist of 125 and 300 classes. Second round will be held on February 9th on the Sicilian track of Noto.