Pirelli races with Skoda in the Italian Rally Championship 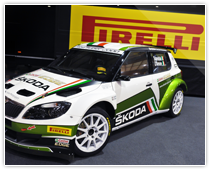 This year, Pirelli plays a leading role in the Italian Rally Championship alongside the top two teams, Peugeot and Skoda. After winning the competition for four years in a row with Peugeot Italia and Paolo Andreucci, Pirelli will also be exclusive supplier to Skoda Italia, who has handed the wheel of its Fabia Super 2000 to Umberto Scandola. Peugeot will begin the season with a 208 R2, before moving later in the year to an R5, both of these being fitted with Pirelli tyres. In recent years, Scandola has often been Andreucci’s nearest rival and this year we can expect a very fierce battle. The Italian Rally Championship comprises eight races, getting underway with the Ciocco Rally and reaching its climax at the legendary Sanremo Rally in October, the latter also being part of the European Rally Championship. The Skoda Fabia Super 2000 can rely on the complete range of Pirelli’s newest asphalt and gravel rally tyres, developed using the experience acquired during the period 2008-2010 when Pirelli was sole supplier to the World Rally Championship, which benefit from a puncture rate of less than 0.02%. Rally tyres are designed at Pirelli’s research facilities in Italy and then built at the “Factory of Champions” in Izmit, Turkey where Formula One tyres are also manufactured.

Pirelli races with Skoda in the Italian Rally Championship
Newsroom