Pirelli ready to take on new challenge at Hockenheim

For Pirelli, which is in its first season of supplying tyres to GP3 and will also equip GP2 and Formula One next year, every race is a new challenge. Few of them though are quite like Hockenheim. The well-known venue for the German Grand Prix, regularly frequented by huge crowds of fans, contains a bit of everything: some straights that are among the fastest of the year as well as an extremely twisty and technical stadium section. 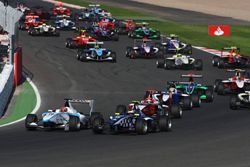 As is often the case in motor racing, it's a question of finding the best possible compromise that will work well everywhere: both in terms of car set-up and tyre choice. For this race, round five of the GP3 series, Pirelli and the championship organisers have opted for the medium-compound tyre: which made its debut at the start of the season in Barcelona and Istanbul Park. This tyre has been chosen precisely because of its proven adaptability, giving drivers both power and control within a wide range of circumstances. The new GP3 series is all about giving young driver the opportunity to make their way into GP2 and eventually into Formula One. With 11 current Formula One drivers having graduated from GP2, GP3 is a vital first step up the ladder of talent. In order to give these 30 eager young drivers the best possible opportunity to display their talents, Pirelli has developed a stable and consistent tyre that puts the emphasis firmly on driver ability. Equally, some degree of degradation is deliberately built in, so that up-and-coming drivers can also learn the art of managing their tyres. Hockenheim, located close to Frankfurt, is a physically and technically demanding circuit that will teach the stars of the future a lot about racecraft. Adding to the many variables that the track throws up is uncertain weather, which can range from bright sunshine to torrential rain at this time of year in northern Germany. The 13-inch medium-compound PZero tyre will also have to cope with a very wide window of speeds, not to mention heavy loads under acceleration, braking and cornering on the 4.5-kilometre circuit. Pirelli's Racing Manager Mario Isola commented: "We chose the medium-compound tyre for Hockenheim, which performed very well in Barcelona and Istanbul, precisely for its flexibility and adaptability: which will be a key to getting the most out of Hockenheim. Like all the tracks Hockenheim is new to us this year, and of course the experience we accumulate in GP3 will be extremely useful to us in the future as we prepare for GP2 and Formula One as well. We saw a very entertaining race at Silverstone on Sunday and we are pleased that our tyres can help the GP3 drivers to show the very best of themselves in front of an appreciative and important audience." After the opening eight races of the season, Mexico's Esteban Gutierrez leads the GP3 series by 26 points from America's Alex Rossi. ART Grand Prix leads the teams' championship ahead of Manor Racing. Practice in Hockenheim takes place from 16:50 on Friday 23 July. Qualifying begins at 08:45 on Saturday morning, followed by race one at 16:20. Race two starts at 08:30 on Sunday, with both races lasting half an hour.
Newsroom

Pirelli ready to take on new challenge at Hockenheim