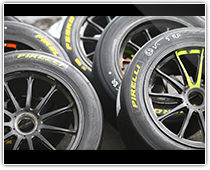 Pirelli has renewed its range of products for GT racing. The Blancpain GT Series uses just one tyre for the entire season. As a result, Pirelli has to come up with one tyre that works well on different cars, circuits, temperatures and races, for both amateur and professional drivers. The slick tyre that will be used for 2017 Blancpain GT Series, which takes in both sprint and endurance races, is called the P Zero DHD. This tyre features a new front and rear construction to make it more suitable for the current field of GT3 cars. The profile has changed to present an optimized contact patch against the track surface and there is a new front size: 325/680-18 (previously 315/680-18). With the combination of new front and rear constructions, as well as slightly wider front tyres, the front and rear axles now feel more connected. This makes the cars easier to drive for amateur as well as professional drivers. The tyres are also equally at home on front, mid and rear engined cars: all of which are seen on the Blancpain GT Series. As a result, this provides a good base for the organisers to build an accurate balance of performance system. 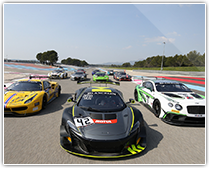 The GT4 category is increasingly becoming a stepping-stone to GT3, with performance characteristics approaching those of the top category in the Blancpain series. In order to cater for the increased performance, and create similarities with the tyres used in GT3 to help drivers step up, Pirelli has started to evolve its range of GT4 tyres as well, with these cars using the new P Zero DHA product, also in 18-inch size.