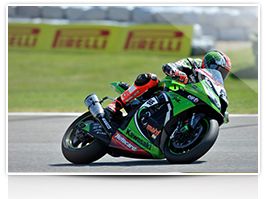 After the overseas round last weekend that saw the return of Pirelli and the eni FIM Superbike World Championship to the Californian circuit of Laguna Seca, where Kawasaki's Tom Sykes and Eugene Laverty with Aprilia triumphed, the production based championship returns to Europe, specifically France, where the penultimate round of the Championship at Magny-Cours will take place. Magny-Cours also marks the return of the other classes of the eni FIM Superbike World Championship that were not present in America. The battle for the title is still open in all classes, with Tom Sykes (Kawasaki Racing Team), who leads the Superbike series with a lead of 23 points from nearest rival Eugene Laverty (Aprilia Racing Team). In Supersport Sam Lowes (Yakhnich Motorsport) needs just two points to be crowned World Champion against Turkish rider Kenan Sofuoglu (MAHI Racing Team India), who surely will try to make the Englishman’s life difficult. 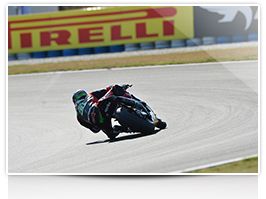 With regard to the Circuit de Nevers Magny-Cours that will host the eleventh consecutive round of the Superbike World Championship and for the twelfth time (in total), it is located in the French countryside in Magny-Cours , near Nevers in Burgundy. Built in 1960 by Jean Bernigaud it was later acquired by the departmental council of the Nièvre and led to prominence to host national and international competitions as well as the Bol D'Or. Some of the track curves reproduce the design of the curves present in other circuits taking their names (for example, the curve or the fast Estoril and the Adelaide hairpin). Magny-Cours from a tyre point of view: The Magny-Cours track is 4411 metres long, with nine left-handers and 11 right and a finishing straight which measures 250 meters. The maximum slope uphill is 2.38%, while falling by 2.68% with a minimum bend radius of 5 meters and a maximum of 474.45 meters. The rider in pole position will start on the right side of the track. The French track is characterised by sudden deceleration and starts, interspersed with medium long straights, arranged in a hilly landscape. In its default configuration it also provided a hairpin (Adelaide) with one of the heaviest braking points present among the international circuits, to arrive from a quite fast straight. Beyond these technical aspects, the asphalt surface is extremely smooth and regular, and therefore the circuit of Magny-Cours has never presented a particular challenge for the tyres, also it is not particularly loved by the riders as it offers few opportunities to overtaking. Last year, since the opening practice sessions on Friday, conditions of the tyre wear were optimal and all the solutions were scaled back depending on the overall grip of the compound. The critical areas of the circuit are intrinsically linked to the ascents and descents in altitude, which can undermine the front soft compound. This explains why some riders prefer to adopt solutions SC2 to get better support on corner entry. Instead an aspect not dependent on the circuit, but which can make more difficult the choice of rear solutions, is undoubtedly the weather that, in this region of France and in this period of the year, is often variable and cold. If in stable weather conditions, the SC0 rear tyre would be the best choice since it allows a level of optimum grip, with low temperatures or with a wet asphalt is good to resort to solutions medium, to obtain a good balance between grip and resistance to tearing. For this reason there are available, along with the SC0, two solutions in medium compound: the standards SC1 standard and a new prototype particularly strengthened against tearing from the cold and cutting efforts. Magny-Cours from a technical point of view: "We now come to the conclusion of this season, there are only two rounds, and it is still nice to see how the award of the title is far from being sure with 3-4 riders in Superbike with 3 different manufacturers that will battle till the last corner to become the new World Champion," said Pirelli Moto Racing Director Giorgio Barbier "Magny-Cours is a circuit that we know very well, are that for more than ten years that we run on and we never had any particular problems. This year for the first time we will use 17-inch tyres in Superbike, it will be interesting to see if there will be a time improvement compared to last year. Now, arriving in this final stage of the Championship, we have collected sufficient data on the compounds of the range, all of which have been used many times and so we have a knowledge of our product which is much broader having seen it in action on several occasions during the year. The rear SC0, for example, we have seen that it can work well even when temperatures are not particularly high, which is why we decided to take it even to Magny-Cours knowing how appreciated is by all riders for its grip and the performances that could deliver ". Pirelli solutions for the Superbike and Supersport classes: At Magny-Cours will be back on track all classes of the eni FIM Superbike World Championship, that's why for this penultimate round of the season Pirelli has brought a total of 4352 tyres to meet the needs of Superbike, Supersport, Superstock 1000 and 600 and European Junior Cup riders. In particular, the tyres reserved for the Superbike riders are 1314, 1744 than for the Supersport , Superstock 1000 have 512 and 540 those for the Superstock 600 , in addition to the 222 planned for the European Junior Cup. Each Superbike rider will have 32 front tyres and 34 rear, for Supersport riders the number will be of 23 front and 26 rear. The premier class riders can count on 3 Superbike slick solutions for the front and the same quantity for the rear, in addition to the rear qualifier tyre in quantity of 2 for rider and the intermediate solutions, 3 for the front and the same number for the rear, and for the rain, in quantities of 8 both for the front and for the rear. 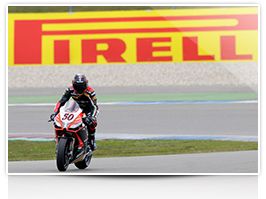 On the front the SC1, in soft compound ideal for low external temperatures and/or circuits on average stringent, and the SC2, ideal for high ambient temperatures because it provides resistance to tread, both in the range and brought to all rounds this year, will be accompanied by a development solution, the S283, an SC1 which debuted at the Nürburgring and that compared to the standard SC1 should offer greater robustness. At the rear standard SC0 and SC1, to which is added a development SC1, the R1431, brought for the first time to Imola and used by riders in the round of Moscow and Silverstone and brought to Nürburgring, should offer more resistance to tearing but equal grip than the standard SC1. The SC0 option is definitely preferred by riders when the temperatures are sufficiently high to use it, is in fact ideal for tackling smooth asphalts and high temperatures, and it offers, in fact, maximum tread contact on smooth asphalt and maximum traction development at high temperatures as well as higher resistance to thermal performance decay. For the Supersport class will be present at the front the standard SC1 in soft compound already used and carried in all the races held so far in 2013 to which Pirelli added a new development solution, the S14, in SC1 medium compound tested at Imola and designed as an alternative of the SC1 range using a different building process. To the rear there will be also in the Supersport class the standard SC1 that has been brought to all rounds this year and which will be joined by two development solutions: the SC0 S510 ideal in the case of higher temperatures and already used in Monza, Portimão and Imola, and the SC1 R1591 which debuted at Silverstone and has also been taken at the Nürburgring, should offer more resistance to tearing but not less grip than the SC1 range. The 2012 Pirelli statistics for Magny-Cours: • Total number of Pirelli tyres brought: 5121 • Number of solutions (dry, intermediate, wet and qualifier only for rear) for the Superbike class: 5 front and 6 rear • Number of solutions for the Supersport class (dry, intermediate and wet): 5 front and 5 rear Number of tyres available for each Superbike rider: 34 front and 35 rear • Number of tyres available for each Supersport rider: 29 front and 29 rear • Superbike Best Lap Awards won by Sylvain Guintoli (PATA Racing Team), in 1'53.143 (Race 1, 17th lap) and Davide Giugliano (Althea Racing) in 1'39.237 (Race 2, 5th lap) • Supersport Best Lap Awards won by: Kenan Sofuoglu (Kawasaki Lorenzini) in 1'51.861 (19th lap) • Temperature in Race 1: air 17° C, asphalt 17° C • Temperature in Race 2: air 20° C, asphalt 24° C • Maximum race speed reached by Pirelli tyres: 289.5 km/h, Leon Camier (FIXI Crescent Suzuki) in Race 2 on the 20th lap.