After the summer break for the production based championship, the Italian tyre brand returns to the historic German circuit for the sixth consecutive year. Riders will have a choice of the SC0 and SC1 compound tyres 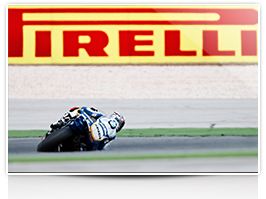 After a four week break, Pirelli is back on track for two-wheeled competition with the circus of the eni FIM Superbike World Championship. Nürburgring, part of the Superbike calendar every year since 2008, also marks the return in the Superbike class of the standard solution in SC0 compound, the R1261,, This is particularly appreciated by riders for the great grip and performance level  it is capable of offering. In Moscow and Silverstone it was not possible to bring the SC0 because of the low temperatures and partly due to the configuration of the two circuits that make them not suitable for a soft compound. However, if the conditions should not allow the use of the SC0, Superbike riders will still be able to count on two solutions in the SC1 compound, one of the standard range plus a development tyre. With five Superbike rounds remaining in the season, equal to 10 races, the final standings remains uncertain with three manufacturers -Aprilia, Kawasaki and BMW- able to contend for the Constructors' title and at least four riders of 4 distinct nationality who can surely claim the title of 2013 Superbike World Champion. The situation is similar in Supersport where fighting for the title are Sam Lowes on Yamaha and Kenan Sofuoglu and Fabien Foret on Kawasaki. All Supersport riders at the Nürburgring can count on both the 2 SC1 rear tyres already seen in action at Silverstone, in particular will be able to further test the development SC1 R1591 which was the preference  for the majority of the riders that lined up on the grid  at the English round. 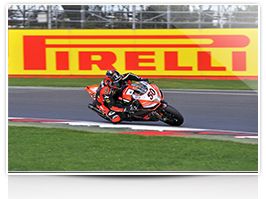 The tenth round of the Superbike World Championship will host also the Superstock classes and the European Junior Cup, for which there are still two races after the German event. Next weekend the third and final round of the 2013 Cup of Nations will also take place. Nürburgring circuit, as we know it today, has little to do with the historic Nordschleife and the Südschleife tracks, the latter of which is now demolished, that formed the historic course. The current track, which replaced the two rings (north and south) is the GP-Strecke, which opened in 1984 and was built in the area the Südschleife track stood. In 2002, the “Merceded Arena” pit area was built. Nürburgring from a tyre point of view: Nürburgring is a 5,137 meter track with 9 right-handers and 7 left and has the pole position on the left side. The track is characterized by a very dated and rather worn surface. Its main weakness is related to the smoothing of the road surface which over the years has led to a significant decrease in the mechanical grip and to the formation of depressions. Having a layout with several fast corners and multiple changes of direction, it is desirable to adopt rear solutions with a good grip, to minimize the effects of understeer and drift. The lack of grip is more pronounced in the points where there is a significant incline and where the traveling speed is high, in these cases it also becomes very difficult to discriminate the different rear solutions. Generally, if the climatic conditions offer medium to high temperatures, the circuit is not particularly aggressive on the rear tyres, but the grip level is very poor. To avoid high slip rates with consequent increases in surface temperature (which can further worsen the grip), and to avoid the formation of wear from travelling sliding, riders will have to adopt solutions with high imprinting as the SC0. In the case temperatures should instead be low, it is better to check the condition of the asphalt with SC1 solutions to overcome problems of cold tearing. On the track there are also some points where hard and fast brakings are requested. This aspect plays an important role in the choice of the front, because if the asphalt requires a good grip of the compound to deal with precision curves, demanding brakings and violent entrances require instead a good support from the tyre. For this reason, at the Nürburgring the front tyres of the grid always tend to be very varied depending on the riding style of the rider. Nürburgring from a technical point of view: "We raced at this circuit at the end of the 90s, to be precise in '98 and in '99, and then after an absence of ten years we returned in 2008, then this will be the sixth consecutive year that the factory derivative championship will race at this track," said Pirelli Moto Racing Director Giorgio Barbier “With seven years of experience we can therefore claim to know this track very well. From a tyres point of view, the track is currently characterized by a very slippery -and therefore poor grip- surface. Beyond this aspect, riders must also always take into consideration the strong climatic variety which is even more accentuated by the forest in which the circuit is placed. The difference of temperatures, and the significant differences between morning and afternoon, can also give rise to phenomena of cold tearing. This is why, despite having decided to take the SC0 which provides better performance in terms of grip compared to the other compounds, we wanted, and needed, to bring two solutions in SC1 compound which are most protected in case the temperatures were lower. Should there be conditions will also be interesting for us to see in action the new specifications of the SC1, R1431 for Superbike and R1591 for Supersport, which so far have shown excellent quality but on which we need to collect more data to assess the real superiority over the standard SC1s." Pirelli solutions for the Superbike and Supersport classes: 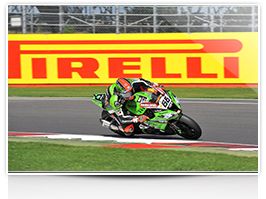 For this tenth round of the season Pirelli will bring 4,462 tyres to meet the needs of the riders in the four classes of the Superbike World Championship as well as those of the European Junior Cup and of the Cup of Nations. Among the quantity of tyres shown above 1,374 will go to the Superbike riders, those assigned to the Supersport will be 1,728, 448 for the riders of the Superstock 1000 and 480 for the Superstock 600. On top of that there are 222 tyres for the young riders of the European Junior Cup and 210 for those of the Cup of Nations. Each Superbike rider will have, for the whole race weekend, 34 front and 35 rear tyres. For Supersport this number is 24 for both the front and rear. In the Superbike class, riders will have 3 front slick solutions and the same for the rear, plus 2 rear qualifier tyres per rider.  There will be 4 for the front and the same amount for the rear in intermediate tyres and in Rain, it will be 8 for both the front and the rear. For the front Pirelli brings the two solutions used in all rounds of the 2013 season, the SC1 in range (R426) in soft compound, ideal for low external temperatures and/or medium harsh tracks, and the standard SC2 (R982) excellent for high external temperatures because it guarantees a solid tread strip. To these must be added a third new specification in SC1 compound, the S283, never brought to the track before, and that compared to the standard SC1 should offer greater robustness. At the rear, after the absence in Moscow and Silverstone, the standard SC0 R1261 is back. The softest solution of the range, which debuted at Monza with the reinforced central area, has been used at Donington, Portimão and Imola with success. This slick solution has a soft compound, ideal for tackling smooth asphalt and high temperatures. It offers, maximum tread contact on smooth asphalt and maximum traction development at high temperatures as well as higher resistance to thermal performance decay, which is why is the solution that tends to be the most appreciated by riders when climatic conditions and characteristics of the circuit allow its use. To run alongside there will be two SC1: the new development R1431 tyre brought for the first time at Imola and used by all the riders that lined up on the grid in Russia and Silverstone. It is a tire designed with the aim of offering more resistance to tearing, but equal grip to the SC1 in range (R828), the latter available at the Nürburgring and already present in the first three rounds and at Imola and Silverstone. For Supersport riders will have the same solutions available at Silverstone. Specifically 2 solutions for the front and the same for the rear, in addition to intermediate and wet tyres. At the front riders will have the two solutions already present in all rounds of the 2013 season: SC1 in soft compound (P1177), ideal for moderately severe circuits, and SC2 in medium compound (R1031), ideal for the more aggressive riders who prefer a compact tread band. On the rear, there will be the standard SC1 R303 in medium compound, ideal for tracks moderate in severity, extent already in the first nine rounds of 2013 and, as a second option, the R1591, a new solution in SC1 compound which debuted with success at Silverstone and should offer the same performance of the SC1 in range together with a greater resistance to tearing. The 2012 Pirelli statistics for Nürburgring: • Total number of Pirelli tyres brought: 4648 • Number of solutions (dry, intermediate, wet and qualifier only for rear) for the Superbike class: 5 front and 6 rear • Number of solutions for the Supersport class (dry, intermediate and wet): 4 front and 5 rear • Number of tyres available for each Superbike rider: 34 front and 35 rear • Number of tyres available for each Supersport rider: 24 front and 29 rear • Superbike Best Lap Awards won by Max Biaggi (Aprilia Racing Team), in 1'55.267 (Race 1, 3rd lap) and Carlos Checa (Althea Racing), in 1'56.148 (Race 2, 4th lap) • Supersport Best Lap Awards won by: Sam Lowes (Bogdanka PTR Honda) in 2'00.222 (12th lap) • Temperature in Race 1: air 24° C, asphalt 35° C • Temperature in Race 2: air 25° C, asphalt 47° C • Maximum race speed reached by Pirelli tyres: 301,1 km/h, 279,8 km/h, Tom Sykes (Kawasaki Racing Team) in Race 2 on the 1st lap.