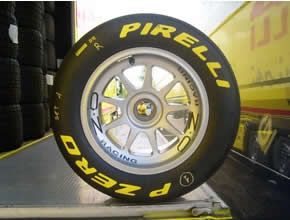 The Italian tyre company returns to single-seater racing for the first time since 1991 at the Spanish Grand Prix this weekend, while it submits a tender to supply Formula One from next season.

Pirelli will begin its association with the all-new GP3 Series when it gets underway in Barcelona this weekend (7-9 May).

The Italian company has been appointed as the official tyre supplier to the one-make single-seater series, which has been pitched as a stepping-stone to GP2, a direct feeder category to Formula One.

Designed as a training formula for young and aspiring drivers, the series is made up of nine race weekends, each consisting of a practice and a qualifying session and two races in an effort to maximise track time for the drivers and accelerate their learning.

Pirelli was chosen by the FIA to supply the control tyre for this crucial new series because of the company's proven ability to contain costs while maintaining a high level of technology to further the best interests of competition.

Eight of the nine rounds support Formula One Grands Prix, starting with the Spanish Grand Prix at the Circuit de Catalunya this weekend and ending with the Italian Grand Prix at the legendary Monza circuit near Milan, where Pirelli houses its global headquarters. The calendar will give the drivers a chance to compete in a high-profile environment and demonstrate their skills to watching team managers from GP2 and Formula One.

Pirelli has designed and developed a racing tyre specifically for the Dallara-built GP3 Series car. With a two-litre, turbocharged engine developed by Renault's F1 arm putting out 280bhp, the tyre will be subjected to extreme stresses and strains throughout a race weekend. Pirelli has an established tradition of breaking new technological ground in the development and design of its Ultra High Performance road car products, so the lessons learned from this have been incorporated into the new GP3 series tyre.

Drivers are allocated three sets of dry weather tyres and two sets of wet weather tyres per event. Championship regulations prevent any modifications from being made to the tyres and their use is strictly policed by series officials to ensure a level playing field.

Although Pirelli prides itself in designing and manufacturing durable tyres, the brief from GP3 Series bosses specified that each tyre should experience a degree of degradation to help the drivers' education process but also to spice up the on-track action.

A full grid of 30 drivers is set to contest the inaugural GP3 Series season-opener in Spain, while the teams that have registered for the championship include the MW Arden outfit, which is partly owned by Red Bull F1 driver Mark Webber.

"We are delighted to be the official tyre supplier to the inaugural GP3 Series," said Pirelli's Motorsport Director Paul Hembery. "Pirelli has a long and proud association with single-seater racing at a variety of levels all the way up to Formula One and we very excited to be helping young drivers develop their skills at a crucial stage in their careers."

Hembery added: "As the official tyre supplier to the World Rally Championship, Pirelli is well versed in meeting the demands required by high-profile motorsport disciplines and providing an exceptional product and level of service. Our approach to the GP3 Series will be no different and this forms vital experience for us as we submit our tender for tyre supply to Formula One from next season onwards. Competition is in our company DNA, so we believe that a control tyre supply is by no means incompatible with an exciting sporting spectacle. But it's also worth pointing out that our first sporting engagement this year with open tyre competition, the Monte Carlo Rally in January, resulted in a great victory for us. Pirelli is capable of rising to every challenge."

Pirelli recently announced its intention to tender for the Formula One tyre supply contract from 2011 onwards. The Italian firm's last involvement in Formula One ended at the end of the 1991 season, following a victory for Nelson Piquet's Benetton-Ford at the Canadian Grand Prix.