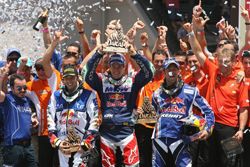 Pirelli, Yamaha and Portuguese rider Hélder Rodrigues placed in podium position at the Dakar 2011 in a great stroke of theater during Saturday’s thirteenth and last stage of this year’s race. Pirelli continued its support of the Dakar race with this promising rider, offering even an updated Scorpion Rally rear tyre with dedicated tread and structure designed for the high-speed racing and extreme off-road terrain. Whilst in front Marc Coma won quietly on his Factory KTM machine, the final podium spot was decided in the last few kilometers. Hélder Rodrigues completed the 2011 Dakar Rally, held in Argentina and Chile in third position overall, a result he obtained from an impressive push over the last half of the race. Despite a 40 minutes difference from Francisco “Chaleco” Lopez Contardo (Aprilia) on the penultimate stage, the Yamaha WR450F rider was confident in the possibility of a podium. The Pirelli rider was the race’s fastest privateer, having been supported primarily by his local country, and also records the best ever result ever for a Portuguese rider in the Dakar. 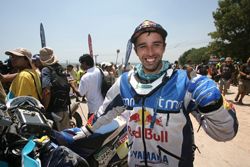 After finishing in third place in penultimate stage ahead of his great adversary in the fight for the remaining podium position, Hélder Rodrigues proved to be especially motivated for the final race to the finish, noting that “anything is possible.” It was. What seemed improbable happened, and Francisco “Chaleco” Lopez lost his third to the Portuguese rider after experiencing mechanical problems on his Aprilia just 22 km shy of the finish line. On the finish line, Hélder Rodrigues, who had just made the second fastest time of the special stage, was just 5” behind Verhoeven and began counting the minutes until “Chaleco” crossed the finish line at 13:23, much too late – 29 minutes too late to be exact – to save his third place now occupied by Hélder. After Aprilia’s podium finish in 2010, the consistency of Hélder and his Pirelli Scorpion Rally tyres allowed Yamaha to take the spot right behind the two lead KTM bikes. For Rodrigues, who finished 4th last year, it is a dream come true. 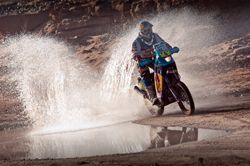 The best-finishing Yamaha rider put a “knife between his teeth” in the race completed the 181 kilometers of the special, a total of 826 between Cordoba and Buenos Aires in 01h25m12s of the last stage second place, and just five seconds behind the winner for the day, the Belgian Frans Verhoeven BMW. This impressive close to the 2011 edition of the Dakar is added to Hélder’s successes during the grueling two week race: a second in Stage 6 and third in Stage 12. Marc Coma (KTM) was the big winner of this year's rally, with 51h25m0s, thereby stealing the title to Cyril Despres (KTM) who finished second, just 15 minutes behind the Spanish rider and former Dakar winner for Pirelli from 2009. Big congratulations to Hélder Rodrigues and Yamaha Portugal for their performance in this year’s Dakar. This shall remain a great result for Portuguese motorcycling, and even a more special one considering its great international importance! Keep track of Pirelli’s off-road and rally racing success via its new and updated website www.pirelli.com.