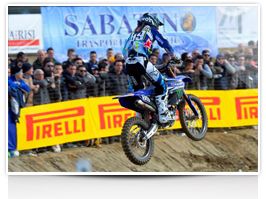 A spring weather and a great audience greeted the riders in Lamezia Terme for the second round of the "Internazionali d’Italia" 2016. On the Calabrian track, flat and with a mixed bottom, the Pirelli SCORPION™ MX32™ have confirmed its wide range of use confirming itself as the reference tyre in the sport.

In the MX1 class Pirelli’s riders didn't got the victory but they got very strong results. Jeremy Van Horebeek, with Pirelli SCORPION™ MX32™ 80/100-21 front and 110/90-19 at the rear, has repeated the second place that he grabbed in Alghero and gets in the same position in the championship. Third place went to Max Nagl who did a great comeback. The fourth place overall by Glenn Coldenhoff has capped a very good day for Pirelli. Bad luck for Romain Febvre that in a crash immediately after the start suffered a deep cut at the elbow which did not allow him to continue the race.

Pirelli’s riders did a great job also in MX2 class and Samuele Bernardini, who used the SCORPION™ MX32™ 80/100-21 front and 110 / 90-19 rear, has finished in second place after leading the pack in the first part of the race. With this result the italian rider rose to third place in the championship.

The Elite class race that closed the day in Lamezia was exciting and was won by Jeremy Van Horebeek, who has taken the lead at the start and has been able to repel the attacks of his opponents until the checkered flag. Good race for Max Nagl also who finished in third place. Absent in Lamezia Terme because he was engaged in an international race in England, Jeffrey Herlings has been astonishing at Hawkstone Park and aboard his small 250 has beaten all the opponents winning the Superfinal. The Dutch rider, with SCORPION™ MX32™ front and SCORPION™ 410 rear, has proven to have the speed and the form that allowed him to win two world titles. Pirelli has monopolized the podium of the Superfinal in England with Shaun Simpson, second, and Kevin Strijbos, third. To end the Internazionali d’Italia 2016 the final round will be held next weekend at Ottobiano and there we'll probably see at the start also the eight-time world champion Antonio Cairoli, in his debut at races in 2016 after the injury to the ribs that left him out in the first two rounds. Results: 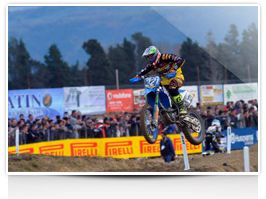 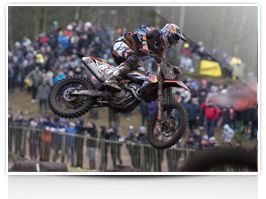