Romain Febvre wins both races in the MXGP class and consolidates his championship lead; Max Anstie using Pirelli tyres is victorious in MX2 while Pauls Jonass keeps the red plate as series leader 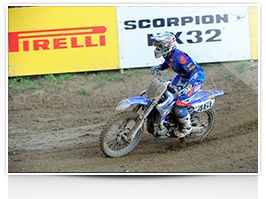 The fifteenth round of the 2015 FIM Motocross World Championship was hosted by the ‘Tazio Nuvolari’ circuit of Mantova; a spectacular track located close to the town centre and characterized with a shallow sandy surface that highlighted the excellent quality of Pirelli SCORPION™ MX SOFT 410 rear tyres that were successfully used by riders in both classes. Romain Febvre grabbed the MXGP class overall victory, his sixth of this season, dominating both heats and extending his lead in the standings to 101 points with just three Grands Prix left on the schedule. The French rider decided to use the SCORPION™ MX SOFT 410 120/80-19 rear and the SCORPION™ MX32™ 80/100-21 front - the same tyres that have allowed teammate Jeremy Van Horebeek to finish the race in second position overall. Sixth position was taken by Glenn Coldenhoff who selected the SCORPION™ MX SOFT 410 in 110/90-19 size for the rear, as did Dean Ferris who classified behind him. It was a good comeback by Max Nagl who, after a hefty absence due to injury, grabbed the eighth place overall. The MX2 class podium was monopolized by Pirelli and led by Max Anstie. Also on this occasion the strong Brit preferred the Pirelli tyres, in this case the SCORPION™ MX32™ 80/100-21 front and SCORPION™ MX SOFT 410 110/90-19 rear rubber. With this result Anstie also climbed to third place in the standings. Tim Gajser and Pauls Jonass used the same combination as the winner and they finished second and third in the Grand Prix overall with the same final score. Jonass is still leading the championship table with four points over Gajser. After the Grand Prix of Lombardia the championship will resumes next weekend at Assen, the Netherlands, for the last European race of the season before the two final rounds that will be held in Mexico and the United States of America. 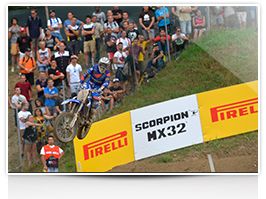 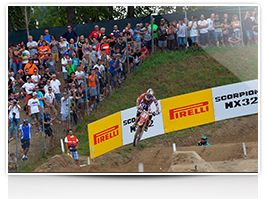