Desalle (MX1) and Tixer (MX2) join the list of winners of the Starcross. Cold and rain characterized the 32nd edition of Mantova Starcross, one of the most important and historical international race in Europe. Thanks to its sandy soil, the circuit has held up fairly to bad weather conditions but it was a lot insidious throughout the main races on Sunday. The front SCORPION™ MX MidSoft32 80/100-21and the rear SCORPION™ MX MidSoft32 110/90-19 have been the tyres chosen by Pirelli’s riders to ride through the holes and deep ruts of the track. 33 out of 52 riders of the entry list, have chosen Pirelli to face the muddy condition of the track. Clement Desalle (Suzuki) has dominated the week end in Mantova. The Belgian has won theMX1 qualifying heat held on Saturday afternoon, and then he has won all three MX1-MX2 heats on Sunday, leading from start to finish line. Unfortunately Desalle's teammate Kevin Strijbos(Suzuki) could not race due to a minor injury occurred in training in the previous days. Fourth and fifth place overall for Kristian Whatley and Gert Krestinov, Team Buildbase-Honda’s riders. The MX2 World Champion, Jordi Tixier (Kawasaki), which for the whole weekend has chosen as rear tyre the Pirelli SCORPION™ MX MidSoft 32 Mud 110/90-19, has been without rivals in theMX2 class. He was first in qualifying on Saturday and then during the Sunday’s races he was two times first and one time second. Jeremy Seewer (Suzuki), second overall, has proven again to be one of the most promising rider in the MX2 class. Jens Getteman (Honda) has finished in fourth position overall. Good news also from USA, where Chad Reed has won Saturday night the Atlanta Supercross main event,  giving Pirelli its first USA victory of the season. 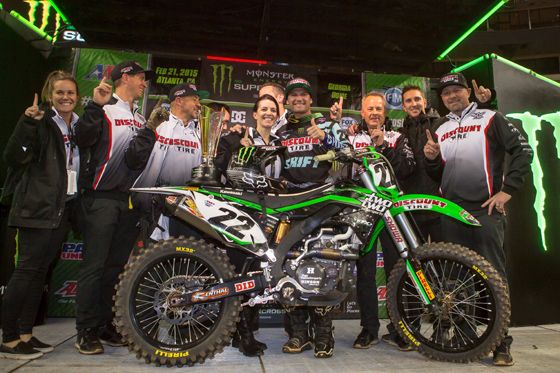